The Dark Iron clan or Dark Iron Nation[1] (also capitalized Dark Iron nation),[2][3][4] formerly known as the kingdom of Thaurissan during Sorcerer-Thane Thaurissan's rule,[5] is a clan of Dark Iron dwarves. These dark skinned dwarves were formerly ruled by Sorcerer-thane Thaurissan and vied for control of Ironforge with the Bronzebeard clan and the Wildhammer clan during the War of the Three Hammers.

Now ruled by Queen Moira Thaurissan, widow of the late Emperor Dagran Thaurissan and daughter of King Magni Bronzebeard, the Dark Iron clan seek to forge a new future for themselves independent of the tyranny of Ragnaros and his minions, which has long been imposed upon them in their home of Blackrock Mountain, so they have become part of the Alliance. Under Moira's guidance, some of the Dark Iron clan have even moved into Ironforge to train the local dwarves in the ways of warlocks and mages.

Thaurissan and his Dark Irons vowed revenge against Ironforge. He took his followers south and founded a city (which he named after himself) within the beautiful Redridge Mountains. Despite years of prosperity, Thaurissan and his sorceress wife, Modgud did not soften in their desire to defeat the Bronzebeards and Wildhammers; they launched a two-pronged assault against both Ironforge and Grim Batol. Thaurissan was routed by Madoran Bronzebeard at Ironforge, and retreated back to the Redridge Mountains. Modgud's assault on Grim Batol was marginally more effective, though she herself fell in battle to Khardros Wildhammer. Some say Modgud was manipulated to ruin by Xal'atath — a dark magical artifact she had acquired.[6] As for the Dark Iron dwarves that fought for Modgud at Grim Batol, they were consequently cursed at the end of the conflict and became skardyn.

As the combined forces of Ironforge and Grim Batol marched on Thaurissan, he attempted to summon an ancient power sleeping beneath the Redridge Mountains. Ragnaros the Firelord, immortal lord of all fire elementals, had been banished by the Titans when the world was young. Now, freed by Thaurissan's call, Ragnaros erupted into being once again. Ragnaros' apocalyptic rebirth into Azeroth shattered the Redridge Mountains and created a raging volcano at the center of the devastation. The volcano, known as Blackrock Mountain, became bordered by the Searing Gorge to the north and the Burning Steppes to the south. Though Thaurissan was killed by the forces he had unleashed, his surviving brethren were ultimately enslaved by Ragnaros and his elementals. They remain within the Spire to this day.[7] 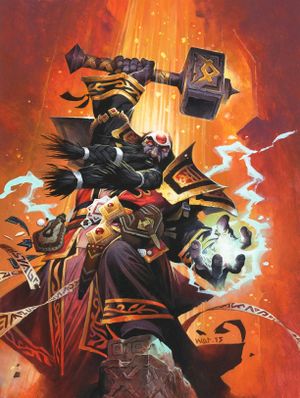 For many years, Dark Iron clan served Ragnaros. They were centered in the depths of Blackrock Mountain, in their dark capital of Shadowforge City. A great deal of Dark Iron activity could be seen in the Searing Gorge and in the Badlands. There had also been incursions into the Wetlands, Loch Modan, the Burning Steppes, and Dun Morogh.

While Emperor Dagran Thaurissan delighted in the power that Ragnaros had bestowed upon him he bristled at his servitude to the Firelord. When Ragnaros ordered Thaurissan to to prepare the Dark Irons for a new war, the emperor was overjoyed. He had long dreamed of conquering the other dwarf clans, not only to rule over them but also to wield their combined power to break free of the Firelord's control.[8]

Dark Irons are enemies of both the Alliance and the Horde. They seem to have helped Sicco Thermaplugg in the invasion of the Troggs in Gnomeregan, as some Dark Iron dwarves and even the Dark Iron Ambassador can be found in the poisoned gnome capital. It's unclear what exactly they did, though.

Some Dark Irons broke ties with the clan in order to seek out business relations with the Alliance and Horde. This group is known as the Thorium Brotherhood. The Dark Irons proclaimed the Brotherhood an enemy of the clan for their relations, and the two groups were sent into conflict.

King Magni Bronzebeard sent a team to kill Emperor Thaurissan, and retrieve his abductee — the previously thought to be ensorcelled Moira Bronzebeard — back to Ironforge. Yet Moira refused to come home and announced that she was pregnant, and that the death of her husband has left a terrible, fiery rage within her heart.[9] Once Emperor Dagran Thaurissan died in his throne room at Blackrock Depths, the Dark Iron clan's leadership was transferred over to his wife Moira Bronzebeard. Moira would rule as the Queen-Regent until her son comes of age to be crowned emperor. 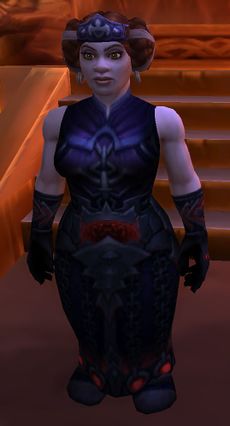 In the power vacuum that followed the Cataclysm, the petrified King Magni Bronzebeard's estranged daughter, Moira, who had married into the much despised Dark Iron clan, briefly claimed Ironforge’s throne and effectively locked down the city. If not for the intervention of King Varian Wrynn of Stormwind and his son, Prince Anduin, her brash actions might have sparked another civil war. With Varian's guidance, control of Ironforge has since been divided equally among the Bronzebeard, Wildhammer and Dark Iron clans through the Council of Three Hammers. Yet as bitterness and prejudice fester among the clans, the council’s ability to govern as one remains uncertain.

In World of Warcraft: Cataclysm the Dark Iron Clan is no longer united. One group of Dark Irons has joined the Alliance with their leader Moira Thaurissan, while the other group has followed Ragnaros into alliance with Deathwing and joined the Twilight's Hammer.[10] Moira's hold over the Dark Iron clan is tenuous at best and there are in fact Twilight's Hammer agents within the faction that proclaim loyalty to Moira. In secret these traitors gather information on not only the other Dark Irons but also the Alliance as a whole for their Twilight Hammer masters. Non-Alliance Dark Irons have a presence primarily in Searing Gorge, with other camps at the Ruins of Thaurissan in Burning Steppes, at Angor Fortress in the Badlands, throughout the Wetlands and Dun Morogh, and small numbers scattered across Loch Modan.

It appears that Shadowforge City remains the capital of the faction that has proclaimed loyalty to Moira,[citation needed]  however due to development decisions, the Blackrock Depths and Shadowforge have not been updated to reflect the lore changes since Vanilla. As such, visiting the city in game would show old or inaccurate lore such as Dagran still being alive, and Moira as a princess, resulting in any actions within the instance as non-canon.

With Ragnaros' permanent death in the Firelands, the clan was finally freed from his enslavement,[11] although there are those that still worshipped him regardless.

In the aftermath of the Cataclysm, many Dark Irons followed the Alliance and took the part on their campaign against the Horde attacking them in Domination Point. 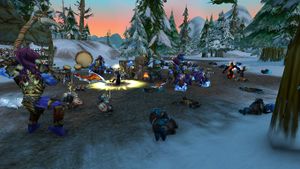 The battle for Shimmer Ridge.

The Dark Iron Forgeguard led by Queen-Regent Moira aided in the defense of Ironforge against the Frostmane tribe and the Zandalari ambassador, Hekima, on Shimmer Ridge in Dun Morogh. They defeated their enemies and gained the respect of King Wrynn and the other members of the Council.[12]

To help promote the union of their clans the Council of Three Hammers combined Fenella Darkvire, Carrick Irongrin and Fendrig Redbeard as a team to help rebuild the Jade Serpent statue.

As of the war in Draenor, the Thorium Brotherhood appears to have united with the majority of the Dark Iron clan once again, with Hansel Heavyhands and Burrian Coalpart assisting the invasion of Draenor on the Alliance side. Thaelin Darkanvil was also an important part of the invasion. A Dark Iron expedition was sent into Gorgrond to spy on the Blackrock clan, as they knew the Blackrock orcs better than anyone else in the Alliance expedition. They established Bastion Rise in the savage jungle. The Dark Irons continued participating in the war effort for its remaining duration.

Several units of the clan led by Moira participated in the defense of Dun Morogh alongside other defenders against the Burning Legion during their invasions.

Several members, including Moira, joined the Conclave. Alonsus Faol was helping them find and gather other priests for the Netherlight Temple.[13] 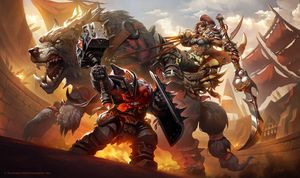 The Dark Irons work alongside the Explorer's League in a dig at Xibala on Zandalar.

After the Dark Iron dwarves were experimenting with Azerite on the Black Anvil, Shadowforge City was attacked by the Venture Company. After fending off the goblin incursion, they returned to discover the Black Anvil was destroyed and the Venture Company stole Ironfoe.[14] Alliance adventurers recovered Ironfoe after killing Mogul Razdunk.[15] To repair the Anvil, a Fragment of the Molten Core[16] was taken to the Firelands to re-energize, during which the Cult of Ragnaros was discovered to exist who aimed to bring back Ragnaros.[17] The Fragment of the Molten Core was then used together with some Azerite to remake and upgrade the Black Anvil.[18] Afterwards, Moira and Anduin officially declared the Dark Irons members of the Alliance, as it had not been official before due to an oversight.[19] 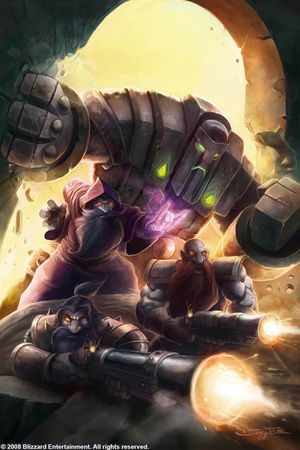 Dark Iron technology is about military and manufacture.

Examples of known technology developed by the Dark Iron:

In Lands of Conflict the Dark Irons are part of the "Dark Iron nation", also called the "kingdom of Thaurisan".[24]