The Dark Iron dwarves are one of the playable Alliance allied races in World of Warcraft, introduced in Battle for Azeroth. Notorious for their gifts of magic and history of treachery, the Dark Irons had long battled the Alliance and Horde under the command of evil forces. Now under the united rule of their queen regent Moira Thaurissan, the clan is, at last, a member of the Alliance.

Dark Iron dwarves first emerge in the bowels of Shadowforge City, before reporting to their faction's embassy (much like all other allied races). Unlike their surface cousins, they prize core hounds as reliable mounts in the sweltering depths of their volcanic homeland. Dark Irons speak Dwarven as their main language. Common is used to communicate with other races. 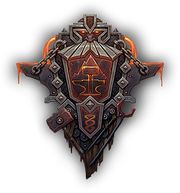 Known for their fiery tempers and fierce determination, Dark Iron dwarves have a turbulent history with the other clans. A failed coup in Ironforge ignited the War of the Three Hammers, and many of the Dark Iron once fought in the service of Ragnaros the Firelord. Though one faction of the dwarves is pledged to Queen-Regent Moira Thaurissan, others refuse to stand alongside their kin. The Alliance seeks a united Dark Iron clan to harness the power of Azerite and aid their struggle against the Horde.[1]

Known for their fiery tempers and fierce determination, the Dark Iron have a history of strife with the other dwarven clans--as well as their own kin. Queen-Regeant[sic] Moira seeks to unite her people and lead them in the fight to save Azeroth.

Moira Thaurissan: The mountain gives us life. Grants us strength. The same blood that flows through our veins... flows through Azeroth's as well. Upon hammer and anvil, our kingdom was forged. With hearts o' fire... and wills o' iron. This world must be defended. Forward, Dark Irons! Tae battle we march!