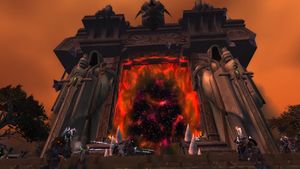 The Dark Portal on Draenor 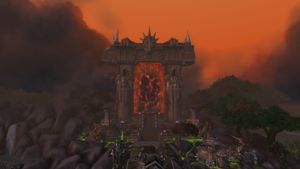 The Dark Portal is a gateway between the alternate-universe Draenor and the main-universe Azeroth. Its name comes from the main-universe Draenor's Dark Portal. It was used by the Iron Horde led by Grommash Hellscream and Garrosh Hellscream to conquer the world Garrosh had escaped from. The power source for the portal were the captured Gul'dan (who very likely had wanted to use it for invading different world), Teron'gor and Cho'gall.

After the Ironmarch invasion force was pushed from Azeroth's Blasted Lands, Archmage Khadgar led the united Horde and Alliance vanguard in the counter attack, eventually freeing the three warlocks, disabling the portal and crashing down the structure with the Iron Worldbreaker.[1]

When Gul'dan took over the Iron Horde, he had the portal's ruins checked by his warlocks. The orcs also sent their workers and supplies to the site.[2][3]

According to Magril the Seer the area still contained a portion of its power. This probably led to the opening of another portal in front of the Dark Portal's ruined stairs - the Black Gate - from which Archimonde arrived. At the site of the two portals Khadgar, heroes of Azeroth and Draenor attacked and defeated the demon lord.

[Vision of Time].[5] While not directly specified to be the case, it is very likely that Garrosh used the shard to link the Dark Portal in the alternate universe to that of the main one in order to invade Azeroth.