Dark Ranger Clea is an Elite dark ranger who wanders the Undercity. She is a "seeker" guard, which means that she can see through

During the Fourth War she attacked Proudmoore Academy in Boralus, luring Rear Admiral Hainsworth into the open for her Horde allies to kill,[1] but was herself fought by the Alliance.[2] Despite seemingly being killed there, she later attended a meeting between Dark Ranger Lyana, Sylvanas Windrunner, and a Horde champion as they discussed a mission to track down Varok Saurfang.[3] 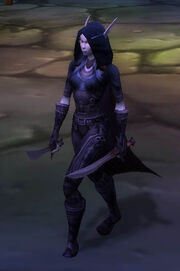 She shares her name with Clea Deathstrider, a random Dark Ranger hero from The Frozen Throne.