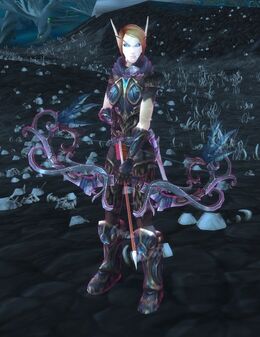 As a high elf.

Dark Ranger Cyndia Hawkspear[1] is a dark ranger who wanders the Undercity. She has a patrol path that encompasses a large section of the city, including the Trade Quarter. She is a "seeker" guard, which means that she can see through

She was a Farstrider who died to Arthas Menethil and the Scourge during the invasion of Quel'Thalas, dying right outside Deatholme early into the invasion.[1]

Following the Argus Campaign, she accompanied Warchief Sylvanas to Spirit Rise in Thunder Bluff. Once Sylvanas heard Magni Bronzebeard's plea to heal Azeroth, she agreed to have the tauren organize the healing in Silithus, and Cyndia was to report back to Sylvanas with all its developments.[2]

She attended a meeting between Dark Ranger Lyana, Sylvanas Windrunner, and a Horde champion as they discussed a mission to track down Varok Saurfang.[3]

She may be related to Renthar Hawkspear, a fellow ranger from Quel'Thalas.