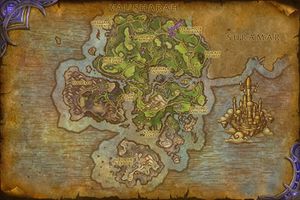 As for Nightglaive... I will NOT suffer a traitor to live!

The traitor must be killed. It is the only way.

Grim news indeed. We cannot afford the loss of even one demon hunter, but you and Kor'vas were right to put an end to Nightglaive.

More importantly, you have made a good friend in Stellagosa. The remnant of the Blue Dragonflight could prove to be a powerful ally.

Quest accept
Kor'vas Blood thorn says: I have to find Stellagosa and Cyana Nightglaive.
Kor'vas Blood thorn says: Meet me up at the overlook. We will finish this business together.
Kor'vas rides off.
Cordana Felsong yells: Come, do your best. Nightglaive has been undergoing some "changes".
Cordana Felsong yells: We are ready for you.