On the Dark Riders cover art.

The Dark Riders[1][2][3][4] (also called the Black Riders)[5] were once a group of traveling merchants who crossed the sorcerer Medivh, who cursed them to an eternity of hunting artifacts for him.[6] They were led by Ariden and are a major cause of danger in Duskwood and Deadwind Pass. They are infamous for being a merciless group of relic hunters.[2] They are the focus of the graphic novel Dark Riders. 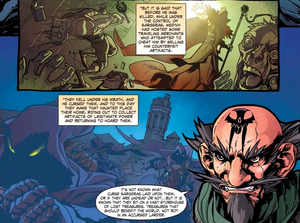 Brink explains the origins of the Riders.

The Dark Riders were charlatan merchants who tried to sell fraudulent magical artifacts to Medivh. Medivh, being possessed by Sargeras, cursed the merchants to forever pay for their dishonesty by collecting true magical artifacts from all over the kingdom for Medivh, and bringing them back to Karazhan. It is not known exactly what curse Medivh placed on them, or if they are undead or not, but the Dark Riders have haunted the kingdom of Stormwind, and especially Duskwood, ever since.[7] Some of the artifacts the Dark Riders obtained over the years were the vampiric sword

[Apocalypse] and the scythe

The Riders first appear at the Yorgen Farmstead, apparently drawn by the time/space warping caused by the Scythe of Elune which Jitters had previously unearthed and lost again inside Roland's Doom. They murdered Sven Yorgen's wife and children after determining that they did not know where the Scythe was located. Jitters remained hidden while witnessing these events, and later recorded them.

The Dark Riders are mentioned as being allies of the necromancer Morbent Fel,[3] though no details are given as to the nature of this alliance.

No physical description is provided, but the Riders are described as speaking in a shrieking voice "both harsh and shrill". At one point, one used a small gem to communicate with someone referred to as the Lord from whom the Riders took directions. When Revil Kost used an artifact called the Cloak of Purity, he was able to see a Dark Rider's face. It was the face of a terrified man.

A group of the Night Watch led by Commander Althea Ebonlocke alongside Revil Kost, Brink, Mardigan, and Karlain attacked the riders in Karazhan and received some of their stolen items.

Ariden, leader of the Dark Riders, steals the Scythe of Elune when Belysra Starbreeze and Valorn bring it back to Duskwood with the intent of giving it to a druid adventurer. The druid, as well as a warlock and a death knight seeking artifacts of their own

[Ulthalesh, the Deadwind Harvester] and

[Apocalypse], meet with Revil Kost at Manor Mistmantle and pursue Ariden to the Riders' base in the catacombs beneath Karazhan. Together with Revil, Ariden is slain and the adventurers retrieve the Scythe of Elune, Ulthalesh, the Deadwind Harvester, and Apocalypse. Revil promises to return the remainder of the Riders' stolen items to their rightful owners. Revil, however, fears that the riders will regroup once again.[4]

Some rumors say that the dark riders may have originated from, or at one time taken up residence in, Raven Hill as well. Dark riders are huge beings that suddenly appear with hellhounds at their feet to run down frantic travelers. Some nights they skirt the perimeter of Darkshire, howling loudly.[10]

They seem to be almost identical to the Nazgûl from the "Lord of the Rings" trilogy of books. Both are dark minions referred to as "Black Riders" or "Dark Riders", speak harshly and shrilly, have the power to communicate with an immaterial being designated "the Lord" (the Warcraft Black Riders' usage of a "bauble" to communicate with their master is also likely a reference to the Palantír stones used in Lord of the Rings), and seek a specific ancient cursed "tool" of great power (Scythe of Elune and One Ring respectively) with which they have an intristic bond and had been previously discovered in a cave by a supposedly insignificant male character who knew nothing of the artifact's true properties (Jitters, Bilbo Baggins).