Dark rangers are undead archers in service of the Forsaken or Sylvanas Windrunner. These cunning individuals, adept at manipulating opponents, are mainly composed of forcibly raised Farstrider rangers of Quel'Thalas. They now enjoy nothing more than sowing dissension and hatred within the enemy ranks.[1] The Forsaken use dark rangers as elite agents or as the personal guards of Sylvanas. They had a great presence in Silverpine Forest and Hillsbrad Foothills.

A dark ranger in the Howling Fjord.

As the war in Northrend drew to a close, Lady Sylvanas herself traveled to the Frozen Halls to take vengeance upon Arthas. Dark Ranger Vorel enlisted agents of the Horde to meet with the Dark Lady along with Dark rangers Loralen and Kalira. Loralen is ultimately slain by the Lich King, though Kalira manages to gather reinforcements in the form of Orgrim's Hammer in order to escape the halls.

Their sudden reappearance during the war against the Lich King would foreshadow the introduction of the hunter class to the Forsaken.

Following the death of the Lich King, the Forsaken have reinforced their territories with their culture seen briefly in Northrend, and are taking on a far more aggressive stance in their war against the remnants of the Scarlet Crusade, the Scourge, and the Alliance. The Dark rangers have taken on a more visible presence, and are seen throughout Silverpine Forest, Arathi Highlands and Hillsbrad Foothills.

A number of dark rangers accompany Lady Sylvanas in the Battle for Gilneas. They discover the Scythe of Elune, the likes of which would allow the Forsaken to have full dominion over the worgen, though it escaped their grasp.

Under the command of Dark Ranger Alina and Galen Trollbane, the Forsaken have set their sights on the Arathi Highlands. Alina believes that the fallen nation of Stromgarde would make a fine setting for a new Undercity.

Dark rangers are seen with domesticated spiders during the Hillsbrad conflict, doing battle with the Bloodfang worgen. They are empowered by Helcular.

With the Scarlet Crusade on its last legs, Dark Ranger Velonara is out to remove the last traces of it from Forsaken territory. Velonara later traveled to the alternate Draenor.

Nathanos Blightcaller has recently been training a new generation of Forsaken rangers comprising of undead humans, making the undead racial composition of the order more diverse. These Forsaken hunters appear to favor the woodsman axe and the crossbow in contrast to the bow and arrow typically employed by their undead high elf counterparts.[2]

A contingent of dark rangers led by Dark Ranger Velonara has also joined the Unseen Path.

Sylvanas took 200 dark rangers to Thoradin's Wall as the Gathering occurred in the Arathi Highlands. When Sylvanas noticed the Forsaken of the Desolate Council walking towards Stromgarde Keep, defecting to the Alliance, she ordered the dark rangers to kill every Forsaken on the field but spare the humans. The rangers mounted bats and carried out the task, harming no humans. Then they regrouped with Sylvanas where she just killed Calia Menethil. As King Anduin Wrynn gathered Calia's body, Sylvanas and her dark rangers simply left.[3] 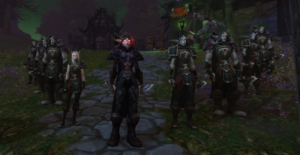 The dark rangers that left with Calia Menethil.

Dark rangers participated in the War of the Thorns and other major conflicts of the Fourth War. After the fall of the Undercity, a group of them conducted a guerilla war from the abandoned town of Strahnbrad against the Alliance.[4]

Numerous night elves slain during the War of the Thorns and the Fourth War were raised to undeath by the Horde. These undead kaldorei became Kaldorei Dark Rangers,[5] and are led by Delaryn Summermoon who acts as their new captain. Sira Moonwarden was also raised to become a Forsaken, but as a "Dark Warden".[6]

The Kaldorei Dark Rangers participated in the Battle for Darkshore as part of the Horde forces.

While some of the dark rangers sided with Sylvanas when she betrayed the Horde, many more remained with the Horde.[7]

Dark rangers are most commonly undead elven women, with blood-red eyes and deathly pale skin. Typically, they are clad in a leather-looking outfit complete with a hood, which could be seen as a dark twist of the Farstrider attire. Nearly all of them are seen with a cloak. Dark Ranger Anya is a prominent example of this style.

Another dark ranger outfit, as sported by Dark Ranger Lyana, is also not an uncommon dark ranger style of choice.

Nathanos Blightcaller has recently been training a new generation of Forsaken rangers comprising of undead humans, making the undead racial composition of the order more diverse. These Forsaken hunters appear to favor the woodsman axe and the crossbow in contrast to the bow and arrow typically employed by their undead high elf counterparts. Like Nathanos, they sport a leather-looking outfit and optionally a hood and face mask.[2]

Nearly all dark rangers are undead high elves found only among the Forsaken. No other faction has the elves' history coupled with the personal knowledge of shadows to learn the arts of a dark ranger. In fact, many dark rangers refuse to teach their arts to anyone who wasn't a former elf. While these rangers have slackened their restrictions some, most dark rangers were once elves.[citation needed]

There has been only one recording of a human ranger and subsequent dark ranger. Nathanos Blightcaller's resurrection as one of the Forsaken and service to the Dark Lady has earned him the rank of Champion of the Banshee Queen. He used to reside at Marris Stead in the Eastern Plaguelands, but now resides in the Undercity teaching hunters to learn new talents. Nathanos has recently been training a new generation of Forsaken rangers comprising of undead humans, making the undead racial composition more diverse.[2]

During the War of the Thorns, lots of night elves were killed. Sylvanas and her Forsaken would later take that chance and raised them into their ranks turning some night elves into loyal dark rangers. 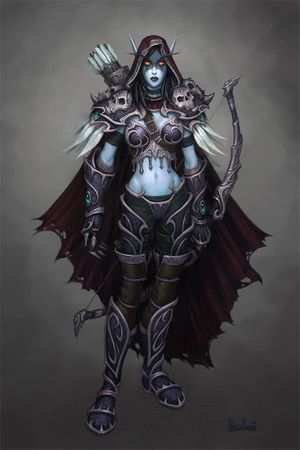 In The Frozen Throne, Sylvanas Windrunner — after being raised as a banshee by Arthas — regained her physical body and became the first dark ranger. Dark Rangers are a playable hero class.

When Sylvanas Windrunner, Banshee Queen of the Forsaken, regained her physical body, she realized that the natural world would never respond to her wishes again. Angered by this development, she turned to the arts that were becoming more and more natural to her: Necromancy. She altered her elven ranger teachings into a new form. Thus, the dark rangers were born.[8] 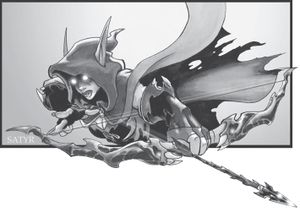 Dark rangers are similar to their high elven cousins but focus on shadowcraft more than nature. Dark rangers are silent and invisible stalkers of the shadows, felling unsuspecting opponents with a single arrow. Dark rangers still favor the bow as the ultimate weapon, using the same arts that Quel'Thalas taught for millennia. Their spells work with manipulating the essences of life and death, as well as various horrible curses and mind-enslaving abilities.[8]

Dark rangers' senses grow sharper than even those of other Forsaken. The dark ranger learns how to fade into dark conditions, wrapping herself with shadows. The skilled dark ranger can notice the tiny movements of her enemies along with other visual and auditory cues that allow her to react more quickly in combat.[9]

While they no longer study nature, dark rangers remain some of the best trackers in the world. Naturally, most dark rangers hail from the scout class, but many newer rangers are former rogues, who use their stealth abilities to act as silent and near-invisible slayers for the Dark Lady.[8]

Once fully trained, Sylvanas's dark rangers once again assumed their roles as guardians and hunters, now working for the Forsaken. Some undead, especially former elves, view rangers as a necessary force and trust them implicitly. Other Forsaken view these shadow killers as relics of an old past, with an inability to move along with the times.

Dark Rangers serve as generals for Forsaken armies, as well as elite scouts and assassins. Like most Forsaken, dark rangers remain in the back lines, performing precision attacks and curses.[10]

Conversion from elven to dark

An elven ranger who dies and returns as a Forsaken undergoes a great shock. She can no longer cast elven ranger spells and loses her woodland stride ability. While some may choose to let things be, most immediately seek out a dark ranger to relearn their arts.

An elven ranger seeking to convert to a dark ranger must, of course, have died, returned as a Forsaken, and seek to learn the arts of the shadow rather than the wild. This ordeal is difficult, as the dark ranger must twist everything she was taught about nature to start learning her darker trade. Then comes the hard part. A dark ranger-to-be must undergo a lengthy trial, where she unlearns everything she was taught as an elf and learns the new arts of a Forsaken.[8]

A recent movement among the Forsaken has taken hold of dark rangers. The Cult of Forgotten Shadow moves like wildfire among the undead, and the dark rangers are no exception to the obsession with the faith.

Sylvanas' dark ranger form has been compared with dark elves by some fans, a race thought to have been the basis of her physical form, however, this is unconfirmed. Though it's partially implied in Horde Player's Guide, where dark rangers are considered cousins to high elves, and the idea of converting to "dark" is given.[8] Dark elves were first mentioned in Day of the Dragon,[11] but to date have not appeared in other sources, though Ul'haik Hadanot is an example that the potential for a similar race evolving from high elves is possible. In The Burning Crusade, there is a new wretched elven type which has darkened grey skin and a gaunt appearance and who are enemies of the blood elves in Quel'Thalas, often living as bandits, thieves, and urchins. Some are undead, while others are humanoid. Many are aligned with the Scourge. Night elves have also been said to have been inspired by dark elves as well, however, they are benevolent compared to most other stories.