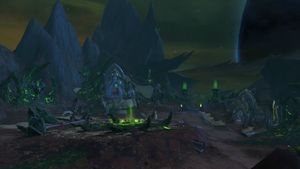 Darkfall Ridge after the battle.

Darkfall Ridge is a large subzone in Krokuun. The area was once inhabited by the peaceful eredar, but had been taken over by the foul creatures of the Legion. Siegemaster Voraan is the leader of the army here. This is where heroes of Azeroth first land during their quest to invade Argus. They eventually win the fight, and claim the area. There are lost artifacts.[1]

Darkfall Ridge is accessible through a portal from the Vindicaar in the south. A path in the north connects to the rest of Argus and the Crown of Destruction can be accessed in the northwest.