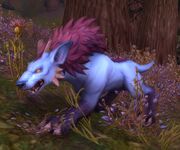 Grimsoul, a stitched darkhound in Maldraxxus.

Darkhounds are a species of magical, demonic[1] dog found in the Tirisfal Glades, Eastern Plaguelands, and Blackrock Depths. The dwarves of the Blackrock Depths use a variety of darkhound called a bloodhound that easily sniffs out intruders hiding in stealth.

Wrath of the Lich King introduces a variation of darkhounds called magehunters, dogs used by mage hunters to sniff out magic users. 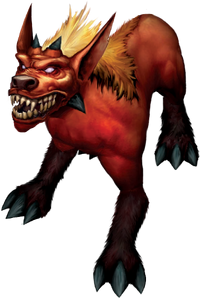 Darkhounds are demonic dogs. This creature resembles a purple hunting hound with a shaggy black mane and a horrible set of fangs. Two horns sprout out of its forehead, and another pair emerges from its shoulders. These creatures frequent forests, traveling either by themselves or in small packs, hunting and killing any living creature as they find it. Unlike normal dogs, darkhounds kill for sheer joy of the kill; they rarely eat what they hunt. No one really knows where darkhounds came from. They appeared shortly after the Third War, terrorizing the wildlife of the former elven kingdoms. While the Forsaken hunting and living in Tirisfal Glades consider them only a minor nuisance, occasionally a large enough pack poses a threat to alchemists exploring the woods for components. Many warlocks instead keep the monsters as pets, training them to be even more lethal than normal. Darkhounds understand basic Eredun, but, being little better than beasts they cannot speak. Darkhounds stalk their prey, shadowing it for hours until a suitable ambush spot presents itself. They then dart out, attempting to bring down their victim with overwhelming numbers and sharp teeth.[2]

Darkhounds are tamable by hunters as part of the dog family.