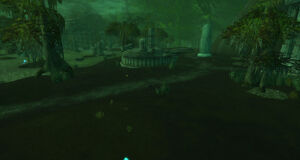 The Darkmist Ruins are Highborne ruins located south of Woodpaw Den in Feralas. The ruins are currently inhabited by Highborne Poltergeist.

The ruins, which are located on top a mountain, can be accessed through the Woodpaw Den from the north, Woodpaw Hills from the east, or Ruins of Isildien from the west.

This city was affiliated with the Shen'dralar, and any Highborne that didn't care for them working with demons left the city. However, one citizen, Verinias, loved Sensiria too much to leave right away. After some time, he could not stay any longer and wished Sensiria farewell. Sensiria, having already been corrupted by the demonic powers, called Verinias a fool and "gifted" their glory upon him. Verinias, having become twisted, has since prevented Sensiria from leaving the ruins by hoarding all the souls for himself.

This was until Sensiria tricked adventurers into killing Verinias and setting her free. 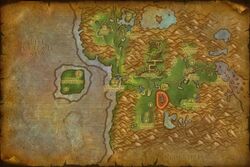 The ruins are also a night elf archaeology dig site.