Darkmoon Island is the location of the Darkmoon Faire.[1] It is small, forested, and roughly circular. The Faire is the primary attraction on the island, although some wild animals live in the woods and water. The island is only accessible once each month, during the week of the Darkmoon Faire.

It’s incredible! It’s unbelievable! You’ll be dazzled. You’ll be amazed! You aren’t prepared for the Darkmoon Faire, ‘cause it’s like nothing you’ve seen before! Don’t be shy now, don’t be bashful, step right up for a tantalizing glimpse of what we’ve got in store for you when patch 4.3 arrives!

No, no, no, Clem. The Darkmoon Faire ain’t what it used to be and it ain’t where it used to be. The management hasn’t changed but the Faire certainly has. It’s a whole new animal. Tickets? You don’t need those old tickets, just rip ‘em right up, ‘cause we’ve got new tickets! Out with the old, in with the new -- new quests, that is! Things have changed ‘round here: we’ve got an island all to ourselves now, and what an island it is. Mist-shrouded Darkmoon Island is a conundrum wrapped in an enigma. It’s a place of mystery and wonder, and you wouldn’t believe the deals we made to get it… or who we made ‘em with. But never mind that, just follow me right through here and I’ll show you what the Darkmoon Faire is all about.

All new! All spectacular!

Catch a show at the marvelous main stage or witness a dazzling fireworks display. But don’t stare too long or you might miss the stunning spectacles that surround you. Gaze in awe of our magical menagerie, get your fortune told by the amazing Sayge, go on a pony ride, experience the healthful effects of carnival food, and more!

Of course, there’s more to the Darkmoon Faire than just fantastic shows and culinary delights. You can still turn in your Darkmoon Cards, but you wouldn’t just come here for measly ol’ cards when there’s so much more to see, experience, and win. Yes, win! You like dancing bears, right? Everybody likes dancing bears. Even bears like dancing bears. How about a dancing bear… you can ride!

That’s not all! We have adorable companion pets includin’ a fez-wearing monkey, a plethora of profession recipes, toys, balloons, souvenirs, delectable carnival snacks and beverages, heirlooms for the little ones, and even replicas of long-lost suits of armor that we’re offering for your Transmogrification needs. You can also make your mark with new achievements and titles. All it takes to earn these fabulous rewards is a few Darkmoon Faire Prize Tickets and a good reputation with the carnies. How do ya get your grubby mitts on some tickets? I’m glad you asked! Step right up! Try your luck! Everyone’s a winner!

Have we got games? You bet we’ve got games, and they’re so easy to play an orc could do it. Just head on over to the midway, buy some Darkmoon Game Tokens, and get ready to play. Easy to learn, difficult to master, anyone can play and everyone can win. Just lay your tokens down for a chance at winning Darkmoon Prize Tickets playing games like Whack-a-Gnoll, the Tonk Battle Royale, the Cannon, Ring Toss, the Shooting Gallery, and more! Five games are there to test your skills at any one time. The better you play, the easier it is to win a bucket of Darkmoon Faire Prize Tickets! Once a month, you’ve got a shot at tickets, and the fun never stops ‘cause you can play as many times as you like. But that’s not the only way to win big!

The nearby woods, west of the faire grounds.

Inside the underwater cavern.

It’s your passport to riches, my friend. Y’see, we need a few things -- just some junk, nothing valuable to a big hero like you. We call ‘em Darkmoon Artifacts, and there’s all different kinds to be found all over Azeroth. The Darkmoon Field Guide helps you discover artifacts while you’re explorin’ dungeons, slayin’ monsters, and fightin’ in Battlegrounds. Without a guide, you’d never notice ‘em, and it’ll help keep you focused on the stuff we want. Whether you just reached level 10, or you’ve crushed the biggest baddies in the land, we need somethin’ from nearly everybody. You won’t have to go too far out of your way to get ‘em and each month you’ll get a new opportunity to seek out an Artifact for us. What do you get out of the deal? Don’t you worry, you’ll get your cut. When you bring a Darkmoon Artifact back to us, you’ll get valuable experience (it builds character, you know!), earn a better reputation, and possibly earn precious Darkmoon Faire Prize Tickets too!

Oh, did I mention that you can use the Field Guide to get to Darkmoon Island whenever the Darkmoon Faire’s monthly extravaganza is up and running?

So, you want to work in show business?

Maybe you’d like a little peek behind the scenes, eh? Want to see what it takes to run the greatest show on Azeroth? Well, it’s not all sunshine and cotton candy, my friend. There are beasts to heal, food to cook, and buildings to fix. If you’re willing to help keep the show going and put your skills to work, you’ll not only impress us, but you can get experience, Darkmoon Prize Tickets, and even polish up your skills -- up to five skill points per profession, per Faire week, if you’re good at what you do!

Like any good carnival, the Darkmoon Faire has a shady side. You can leave the skilled labor to the suckers and go for a faster score instead. If you’ve got the minerals, the Darkmoon Deathmatch offers an experience unparalleled since the Gurubashi Arena. Pitmaster Pei has a big old treasure chest just brimming with goodies and Darkmoon Faire Prize Tickets that he’ll drag out into the Darkmoon Deathmatch Pit every three hours or so. Everybody wants it, so if you want a piece of the action you’ll just have to jump in and prove that you’re the toughest one in the Pit. Oh, the Faire is perfectly safe, Clem. Just don’t wander into the woods.

Now, now, don’t panic. Darkmoon Isle might be a bit spooky, but except for the Deathmatch Pit, the Faire itself is completely safe, I guarantee it. It’s a sanctuary even, and we won’t let anybody’s beef ruin the fun. The shadowy woods surroundin’ the fair are another thing entirely, though. I wouldn’t say that people have disappeared into those woods never to return, but, well… people disappear into those woods never to return. So watch your step, and your back, when you leave the Faire. Don’t say I didn’t warn ya!

Now that you know how amazing the new Darkmoon Faire is, you won’t want to miss it. Just take a look at your in-game calendar, and the Darkmoon Faire dates will show up there on the first week of every month. Darkmoon Faire barkers and displays will also pop up in every capital city to herald the arrival of the Faire. Silas Darkmoon himself has even started up a mailer to make sure that no one misses out!

During the first week of each month, convenient Darkmoon Faire outposts with Darkmoon Portals will appear in Elwynn Forest and Mulgore, offering free rides to Darkmoon Island and the Faire!

Darkmoon Mages in capital cities and on Darkmoon Island will also be around to help you get between the Faire and various capital cities. There’s no such thing as a free lunch, so naturally you’re obliged to compensate them for their services.

The all new Darkmoon Faire is coming to Darkmoon Island in patch 4.3. Don’t miss it!

The staging ground in Elwynn Forest

The staging ground in Mulgore

Players can reach the island via the portal in the Darkmoon Faire Staging Grounds that are set up near one of their major cities:

Alliance
The Alliance Darkmoon Faire Staging Grounds are in Elwynn Forest, just south of the crossroads in Goldshire, which in turn is just down the road from Stormwind.

Horde
The Darkmoon Faire Staging Grounds for the Horde are in Mulgore, just southwest of Thunder Bluff. They're reachable without flying by taking the western lift down from the city.

To quickly get to the staging grounds you can pay a Darkmoon Faire Mystic Mage located in each major city to teleport you - the price is low and varies by character level.

Other than using a

[Hearthstone] or other personal teleportation methods, players need only travel to the southernmost point of the island to the Darkmoon Boardwalk where a Portal Back is under a small tent. Taking the portal will take you back to the staging grounds in either Elwynn Forest or Mulgore, depending on your faction.

If you portaled to the island and immediately remembered you forgot something, you can just turn around and use the Portal Back to your faction's staging ground.

The Darkmoon Faire itself is the biggest feature of the zone, situated in the flat, south-central part of the Island and occupying nearly half of that region. The Faire borders the beach in the south, which extends around to the east and northwest until it runs into cliffs. Darkmoon Island's most prominent geographical feature is a high ridge, inaccessible in places, running along the north and east sides of the island. Portals from Elwynn Forest and Mulgore deposit players on the ridge in the north, where they can follow a path south down the ridge to the Faire. The entire interior of the island, aside from the Faire itself, is heavily forested. 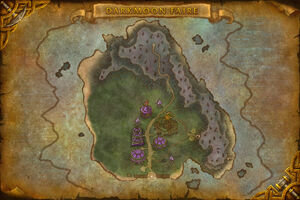 Jeremy Feasel and Christoph VonFeasel on the World Map of Azeroth.

Although the exact location of the island is a mystery, it's likely to be between the Maelstrom and Northrend, due to being in the Great Sea, ability to catch fish found only in northern Azeroth, and there's occasionally a tuskarr visiting the faire. Tuskarr are said to die just a few days after leaving their own climate. Although this is somewhat proven wrong by Trawler Yotimo at the Anglers Wharf in Krasarang Wilds.

The Battle Pet Daily Tamer addon show Jeremy Feasel and Christoph VonFeasel as being South of the Broken Isles.