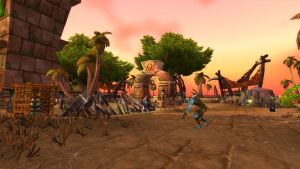 After Vol'jin's assassination attempt on Pandaria, the Kor'kron forcibly took control of the grounds. The hostile orcs captured many members of the tribe while some guards stood up to them. The area was liberated by Thrall and the Horde adventurer.

During the Fourth War when Zalazane returned, the troll trainers with Darkspear Tribesmen and Shaman fought against the Mindless Trolls here. Princess Talanji, Rokhan, Master Gadrin, Zen'tabra, Bwemba, Shadow Hunter Rala, and Shadow Hunter Mala were gathered next to the

[Urn of Vol'jin] on the eastern part of the training grounds.