For the character from an alternate universe, see Syth.

Darkweaver Syth is the first Boss of Sethekk Halls in Auchindoun.

Darkweaver Syth is charged by the Talon King Ikiss to defend the Sethekk Halls while the renegade arakkoa search for their enigmatic god. A master of shadowy magic, this wizened trickster has learned how to bend the very elements to his sway.

The elementals are immune to their own school of magic. The Shadow Elemental is Immune to shadow-based

[Banish], being in its school of magic. Earth, Fire, and Arcane Elementals are fearable. The Shadow Elemental can be feared by a warrior's Intimidating Shout, but not by priest or warlock fear effects. 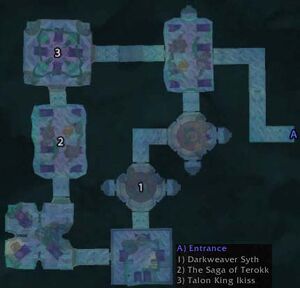 Darkweaver Syth can be found at map location 1.

A completely offensive strategy, by rushing in to DPS him. It can get pretty crazy, and is only suggested if you have good healing for the fight. If done right, you can easily finish him without members dropping below 50% health.

Have the tank charge in and aggro him in the center of the room. All other party members should bunch up right inside the doorway. When the first wave of adds spawn you should do a Warlock or Priest fear and just keep burning the boss. When second wave comes frost nova, fear, or any kind of mass crowd control. This is a burn fest. Don't worry about burning down the adds as they each have 4k health and make it difficult to keep off the healers.

A more conservative strategy is to pause to kill each wave of elementals before returning to Syth. This strategy can be less risky for parties where a majority of the characters are not yet level 70, as the accumulation of a dozen elementals may be too much for a lower level party to handle.

Being that 100% of the damage in this fight is magical in nature, a mage using Dampen Magic might be a good idea. Potions of Magic Resistance (+50 to all schools) are particularly useful here (but far from needed even on heroic), but note that they will activate your combat potion cooldowns and don't stack with a priest's Shadow Protection or a Paladin's resistance auras.

With regard to the order in which the Elementals are to be slain:

With a Priest and Paladin, I would advise that Shadow be last to be killed, and that Frost(or Fire) be second to last, since these resistances can be provided by Frost(or Fire) Resistance Aura and Prayer of Shadow Protection. More Generally, just remember to bear in mind the resistances your party can afford.

An alternate strategy might be to Kill the shadow elemental first, since reportedly Syth does mostly Shadow damage and the debuff from this elemental could be the most damaging. Furthermore, this is the only elemental immune to fear/banish and the most likely to cause trouble.

(AoE Strategy) - not recommended due to fears, but feel free to use instant AoEs if they do end up grouped after they come back from the fear, if they're still alive. If you have a mage and a secondary healer then the mage can take the adds using arcane explosion in short order. The mage can mitigate some damage using fire or ice ward, and ice barrier if so spec. The arcane elemental will need to be dealt with separately as it is immune to arcane explosion.

Resistances don't play a major role in this fight.

Some groups attempting this may have insufficient healing endurance to pursue the conservative strategy, while also lacking more than one source of AOE fear and/or the strong DPS required to pursue the fully aggressive strategy. For this situation, assuming that at least one AOE fear is available, it is best to kill the first set of summoned elementals, then fear the second set and attempt to burn him down before they recover (while ignoring the third set of summoned elementals entirely).

The adds have an aura / AoE that does approx 800 damage of its element per tick as well as stacking a debuff that increases the damage the player takes from their element. The adds seem somewhat fear resistant, though only the shadow elemental is actually immune.

Resistance buffs / totems / auras are very useful. Dampen magic on everyone is recommended since you will be getting up to 4 AoE hits per tick as well as boss spell damage.

The boss remains very squishy and does only light damage. Just DPS him down to 80–75%, focus the adds one at a time having decided kill order beforehand. Then give yourself a bit of time and get topped off before taking him down to 60–50%. Rinse & repeat; however, when the final wave comes at 10%, just finish off the boss quickly and blow fears on the elementals.

Edit: If you have high DPS group you can also have the tank blow fear and if you have a lock in the group have him fear again and all DPS on the boss.