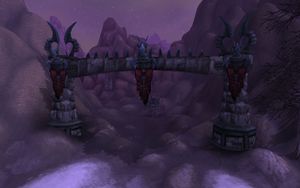 is an area being used as a Twilight's Hammer recruitment and training spot. It is found in the southeastern part of Mount Hyjal. It was previously a subzone of Winterspring.

Its main entrance from Winterspring has been redecorated to match the Twilight cult's theme and appearance. This area, however, remains empty until players are sent there for quests. 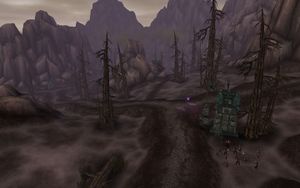 The demonic remnants of the Burning Legion army that attacked Mount Hyjal during the Third War fled once Archimonde was killed and took refuged in Darkwhisper Gorge.

After the Cataclysm, the Twilight's Hammer managed to take the gorge from the Burning Legion demons by force and have held onto the territory with only one exception, the Gates of Sothann, which was taken by the pit lord Garnoth and his army.[1] 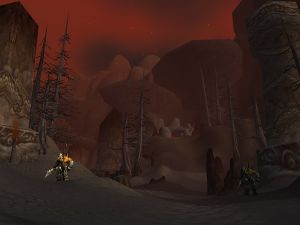 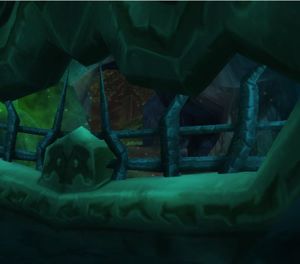 The unused instance portal to Hyjal. If one looks closely, you can see trees beyond.

Darkwhisper Gorge was previously an area in the far south of Winterspring which consisted of a network of tunnels and chasms. This area was inhabited by elite demons of an approximate five-man difficulty before The Burning Crusade. The demons in this area were important to a number of quests, unlike their Blasted Lands counterparts.

Darkwhisper Gorge is a treacherous cavern that lies along Winterspring Valley's southern slope. Poisonous green vapours bubble out of acid pools deep within the bottom of the gorge. Malevolent sounds echo from a cave at the furthest end of the gorge, leading some night elves to believe that demons may have taken refuge in the toxic depths.[2]

Darkwhisper Gorge consists of a series of ravines and canyons atop the mountainous range that borders Hyjal Summit and Winterspring. It is now inhabited by agents of the Burning Legion, including pit lords, felguards, doom guards and infernals. Thousands of the foul creatures live here, and their leaders are unknown. There are fissures and caves leading deep into the ground, not all of which look natural. It is likely the demons may be tunneling underneath the summit, closer to the Well of Eternity.[3]

Darkwhisper Gorge hides a massive army of demons powerful enough to besiege Mount Hyjal — but they seem to be waiting for something.[4] If they ever attack Hyjal, the blue dragonflight at Mazthoril will be needed to assist the rest of dragons at the summit.[5]

The recent success of the goblin town of Everlook has brought more adventurers into Winterspring, which the natives hope will aid them in defeating the threat of the demons of Darkwhisper Gorge.[4]

Eventually the blue dragons discovered that the waters of the Well of Eternity were draining: the demons had manage to create an underground tunnel system below the well, and drained the powerful waters into their tunnels to use for their own purposes. The dragons, who would be vulnerable in humanoid form inside the tunnels, asked the heroes to accompany them to investigate the situation. In the caves they discovered that the demons were led by an eredar warlock who was planning to consume the water in a ritual in an attempt to gain enough power to resurrect Archimonde.[6]