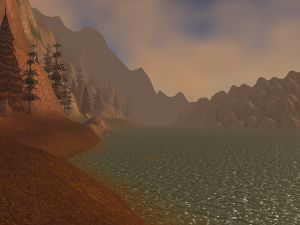 The lake in the Second War.

Darrowmere Lake is one of the largest lakes in the Eastern Kingdoms. It is located in the southeastern part of the Western Plaguelands, and is one of the most symbolic places of the fallen kingdom of Lordaeron. At its center there is the abandoned island town of Caer Darrow where the House of Barov stood. Underneath the town lies Scholomance, home of the Cult of the Damned and countless undead minions.

This lake was the site of many naval battles in the Second War.[1][2] The human ships there consisted mostly of the Proudmoore fleet. Prior to the burning of Quel'Thalas, the Grand Admiral ordered several of them to carry Turalyon, Alleria Windrunner, and their army to ferry them near Stratholme. Turalyon also considered sailing straight into Quel'Thalas, but Alleria assured him that the elves wouldn't allow human ships up their portion of the river.[3] During the war, Zul'jin and his group were driven near the shores of the lake and the warlord was captured.[4]

This freshwater lake lies to the southwest in the Eastern Plaguelands. The Greenrush River, with origins in Zul'Aman, travels through the Eastern Plaguelands and finally empties into Darrowmere. This lake was the site of many naval battles in the Second War, though now it is in the Scourge's hands and their filth pollutes the waters; more dead fish wash up on the shores every day.[5]

The Isle of Darrow is a solitary island located in the middle of the lake. The keep of Caer Darrow is located on it.[6]

The eastern side of the lake is exposed to a constant breeze that carries with it fresh air blown down from the peaks of the Hinterlands. This is where the plaguemist is thinnest in all the Plaguelands, and traces of blue sky can even be seen reflected in the large lake.[citation needed]  The city of Aerie Peak overlooks Darrowmere Lake.[7]