“Here it shall be. We will have our glory again, and this will give it to us. So much power... The power of the Well of Eternity, transformed with our guidance into something greater yet!”

Dath'Remar Sunstrider was the leader of the Highborne who survived the War of the Ancients. He became the founder of the kingdom of Quel'Thalas and the first of its royal family, the Sunstrider dynasty.[4]

Dath'Remar Sunstrider was born a member of the wealthy and powerful Highborne. His family name was an ancient one, but most night elves had always considered it somewhat odd, given that they were primarily a nocturnal people who worshiped the goddess Elune. Even his appearance was strange, for his auburn hair bore streaks of gold.[5]

According to rumors passed down through generations, a young Dath'Remar dreamed of the weapon

[Felo'melorn]. In that dream, the arcane blade burned like the sun and dispatched so many enemies that it created a swift-flowing river of blood. Dath'Remar would later recount the specifics of the blade's appearance to the renowned magesmith Luminarian who crafted the weapon on his arcane forge.[6]

Regardless of Dath'Remar's unusual name and appearance, he, like the rest of his caste, was fascinated by the first Well of Eternity. Over time Queen Azshara and the rest of the Highborne became obsessed with studying and harnessing the Well's magic. Their abuse of that magic provoked violent storms around the Well and attracted the notice of Sargeras, the dark titan, who quickly enthralled the helpless night elves and bent them to his will. He promised to remake Azeroth into a paradise if the night elves helped him enter their world. Working toward that goal, the deluded Highborne summoned increasing numbers of the Burning Legion into the palace. Eventually, these demons marched out of the palace and began slaughtering night elves. They quickly leveled most of the capital city, Zin-Azshari. Only the Highborne and their homes were spared. Dath'Remar was even offered to be turned into a satyr by Xavius but declined, becoming increasingly uneasy over the Highborne's affiliation with the Burning Legion.

The night elf race scrambled to defend itself, and the War of the Ancients broke out. Even so, the Highborne worked feverishly to widen and stabilize the portal they had opened into the Twisting Nether, so that Sargeras could use it to reach Azeroth. They abandoned all their other studies of the Well; they hardly slept, if at all; and they ate and drank so little that they became skeletally thin. Even so, Sargeras' lieutenants were displeased with the Highborne's slow progress and proved quick to slay spellcasters who faltered in their duties. Many of the Highborne broke free of Sargeras' influence and realized that they had made a foolish choice in serving the Legion. Although Sargeras had made glorious promises, he had provided nothing but grueling and thankless work. It seemed likely that instead of rebuilding the world, Sargeras intended to destroy it.

Word reached Dath'Remar that High Priestess Tyrande Whisperwind had been captured by the Legion and taken to the palace. He was appalled to hear that the leader of the Sisters of Elune had been made a prisoner of the demons. Accordingly, he learned the location of her prison cell and paid her a secret visit. She proved a sympathetic listener, and so he found himself confiding in her. Working in secret, he formed a desperate plan. He contacted all the other Highborne who had come to consider the Burning Legion the enemy. Then he went to visit Tyrande one last time. He explained that he and a group of other Highborne were leaving the palace. They had agreed to help her escape if she would speak to the night elf defenders on behalf of the rebel Highborne. She quickly agreed, for she believed in the compassionate teachings of Elune and felt that the Highborne deserved a chance to redeem themselves for their reckless actions.

During the escape, Tyrande was unexpectedly separated from the rebel Highborne when she was snatched into the air by an attacking demon. Dath'Remar and others were attacked by guards of the Highborne still loyal to the Burning Legion. He waved his hand and the guards flew into a wall. He said, "That will teach them to dare attack a Highborne of the Elite Circle."[7] Nevertheless, Dath'Remar and many of the other Highborne managed to escape the palace, rendezvous with the rest of the night elves and joined the Kaldorei Resistance to the opposition of many night elves. As Dath'Remar fought against the demons with Felo'melorn in hands. The weapon brought hope among the night elven defenders.[6]

Later, the Great Sundering created a new ocean, and both groups of night elves were forced to flee for their lives. The rushing waters pursued the elves all the way to Mount Hyjal before finally subsiding. On Mount Hyjal, the Highborne and the Resistance reunited once more.[8] Dath'Remar and a few other night elves soon discovered that Illidan Stormrage had stolen several vials of pure energy from the first Well of Eternity, and then emptied three of the vials into a normal lake. In doing so, he had created a second Well of Eternity. He considered himself a hero, but most other night elves disagreed. They confiscated the remaining vials from Illidan and sentenced him to imprisonment for the rest of his immortal life.[9]

7,300 years ago, in the centuries following the Sundering, relations between the Highborne and the rest of the night elves were strained. The Highborne's abuse of arcane magic had led to the Burning Legion's invasion and the shattering of ancient Kalimdor. Countless night elves had been killed by the demons. Thus, arcane magic was now a crime punishable by death. Regardless, Dath'Remar and the rest of the Highborne continued practicing their sorcery. As the highest caste of ancient night elf society, the Highborne had studied arcane magic for more than a thousand years before Queen Azshara came to the throne. Most other night elves had significantly less knowledge and skill at manipulating arcane energies. The Highborne had no intention of surrendering the magic they saw as their birthright. They felt that the lower-caste majority had neither the right nor the ability to judge the safety of arcane magic. Nor were the Highborne the only ones to maintain that arcane magic was worth pursuing.

The Highborne soon grew bold in defying the new laws against arcane magic. They would not bow to the hysterical fears of the lower-caste majority. The Highborne felt they had taken all the necessary precautions by resolving to be more cautious than their predecessors. After all, the Highborne had no desire to bring about another Sundering. Rather than execute the Highborne, the rest of the night elves sentenced them to exile after they had unleashed a terrible magical storm over Ashenvale. The Highborne were thoroughly exasperated by what they saw as a foolish overreaction against sorcery. They were therefore not unhappy at the prospect of exile; on the contrary, they looked forward to it. Thinking ahead, they contrived to steal one of the magical vials that had been confiscated from Illidan.[10] 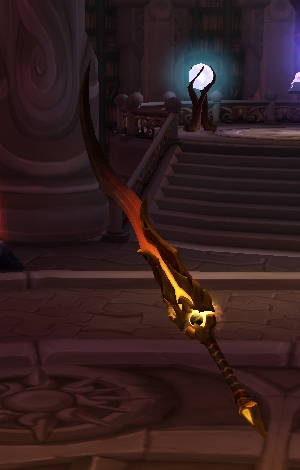 The exiled Highborne then eagerly sailed to the Eastern Kingdoms, still under Dath'Remar's leadership. Gradually the Highborne lost their connection to the second Well of Eternity, though Dath'Remar had prepared for this eventuality too.

All the same, they struggled onward. Deep within the northern forests of the continent, in the continent of Lordaeron, they founded the magical kingdom of Quel'Thalas. Using the vial the Highborne had stolen, Dath'Remar created the Sunwell, a fountain of magical energy that, while weaker than the original, Dath'Remar claimed would one day become stronger than its predecessor. That day, the high elven race was born, the energies of the great well immediately altering the elves' appearance from their night elven forebears. Dath'Remar led his people in the magical construction of their new nation.

The Sunwell was designed to be constantly but exclusively available to the high elves, who chose its name as a further renunciation of night elf society. Dath'Remar was crowned the first king of Quel'Thalas and though he did not rule, the king retained a modicum of political power.[11]

Dath'Remar's signature weapon was the sword 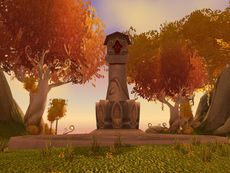 The Shrine of Dath'Remar standing tall on Sunstrider Isle.

Dath'Remar's throne was inherited by four of his descendants over the years. His earliest named successor (following two unnamed monarchs)[12] was King Anasterian Sunstrider, who reigned Quel'Thalas for roughly 2,800 years, presiding over conflicts such as the Troll Wars, the Second War, and the waning moments of the Third War. In the wake of the Third War, Quel'Thalas was nearly scoured from Azeroth: a Scourge invasion saw almost 90% of the kingdom's population culled, King Anasterian slain, and Dath'Remar's royal legacy left in the sole hands of Prince Kael'thas Sunstrider.

The high elves took up the name "blood elves" in the wake of this devastation, and had a monument called the Shrine of Dath'Remar created in their first king's honor.[13]

According to The Founding of Quel'Thalas Dath'Remar took his ancestral name Sunstrider, meaning 'he who walks in the day,' after they landed in the Tirisfal Glades. According to the War of the Ancients Trilogy and the Warcraft Encyclopedia, Dath'Remar already had the name Sunstrider. Although apparently there is a Remar dynasty as well, Kath'ranis Remar. It's unclear which sides of the family Remar and Sunstrider originate.