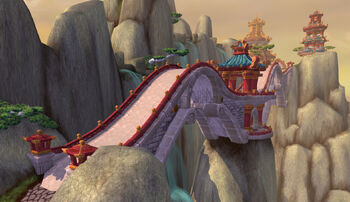 The Dawning Span is a bridge that connects the Temple of Five Dawns to the Ridge of Laughing Winds on the Wandering Isle. At the center of the bridge is a stairway that leads down to a little tea house, where Lorewalkers give history lessons to young pandaren.

When the player first crosses the Dawning Span as a new pandaren character, Zhao-Ren can be seen flying by.

The Song of Liu Lang