For the pyramid, see Dazar'alor (pyramid).

Dazar'alor refers to the urban center of the Zuldazar region. It is named after the royal palace, the pyramid of Dazar'alor. Two of the palace's floors, centered around the Great Seal in the palace's interior chamber, serves as the Horde's embassy on Zandalar and includes some portals to each major city, profession trainers, bank and guild banks, transmogrifier and a mission table. The current ruler of the city is Queen Talanji.

The glorious city of gold was founded by the King Dazar after the exodus of his people out of the muck and mire of Nazmir.[1]

The Cataclysm inflicted great damage on Zuldazar,[2][3][4] causing the great palace of King Rastakhan to list to one side, the forum to be flooded with seawater, jagged fissures tearing up the tiles, and high tides coming up to the market awnings.[4] But while there was some damage, the city was rebuilt, after Zul's departure.[5]

After the Horde saved Zul and Talanji from the Stormwind Stockades, Zandalar let the Horde establish an embassy within the Great Seal. Some time later, Zul launched an insurrection against Rastakhan. With Zandalar opening its borders to non-trolls, other races such as tol'vir and tuskarr traveled to the Port of Zandalar to do trade.[6]

During Faction Assaults, the Alliance Airship shot cannonballs at the pyramid.[7]

The upper part of Dazar'alor, the Great Seal would come under attack from Mythrax, seeking to unleash G'huun.

During the battle, King Rastakhan urged Bwonsamdi to aid his forces. Bwonsamdi created a blood moon and raised the dead to fend off the Alliance. However, despite the Horde and the Zandalari's combined defenses, the Alliance breached Dazar'alor and faced Rastakhan. Rastakhan refused the Alliance's offer of surrender and declared that the Zandalari would endure long after the Alliance had crumbled to dust.[8] Determined to protect his empire and people, Rastakhan fought against the Alliance forces until his death.

Following the death of King Rastakhan, the Alliance fleet withdrew from Daza'alor while the Zandalari, the other troll tribes, the Horde, and even the vulpera mourned the King.[9]

During the sacred rite of kings and queens, many Dazar'alor citizens and Horde representatives gathered at the steps of Zanchul to celebrate the ascension of the new queen. However, before Talanji could begin the sacred ritual, dissidents led by the White Widow rose up in protest of a priest of Bwonsamdi becoming their queen. In response, Talanji and her allies dealt with the protests by making the dissenters see reason and allowed them to bend the knee,[10][11] however not all chose to accept and instead fought to the death for their opinions.[12][13] 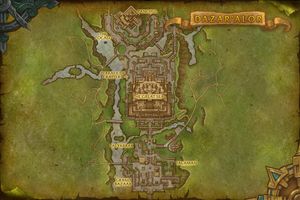 Map of Dazar'alor and the rest of the city. 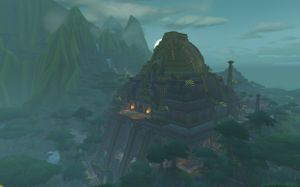 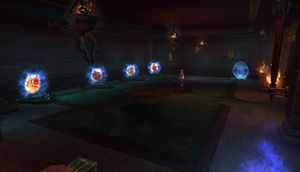 It is likely that Dazar'alor translates to "Dazar's temple", with Dazar referring to the first king of the Zandalari, and with the Zandali word "Alor" possibly meaning temple or altar.