For the in-game capital, see Dazar'alor. 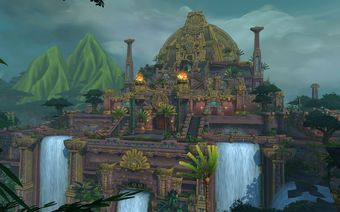 The pyramid of Dazar'alor is the royal palace of the Zandalari Empire, forming an area within Zuldazar referred to as "the city of Dazar'alor". The pyramid is capped by the Great Seal and the Golden Throne.[1] The palace currently serves as the residence of Queen Talanji.

Giant concentric wheels turn around the outside of the palace, connected to a titan disk within. The higher levels are open to the Speaker of the Horde, in support of their activities upon Zandalar Isle, while inside and lower levels of the pyramid are usually closed. Alliance adventurers broke into these areas during the Battle of Dazar'alor raid.

Dazar'alor is an enormous pyramid with about 11 or 12 levels. At the apex is the Golden Throne atop the Great Seal. Further down is the Royal Armory, and surrounding the pyramid is the Terrace of Crafters, which contains an entrance to the Hall of Glimmers on the side of the building. Ritual halls (the Hall of Ritual and Hall of Strength) exist in crevices on the south side, which overlooks the Grand Bazaar.

Inside the pyramid, the lowermost levels are occupied by the Halls of Opulence, named after the guard of the royal treasury. Right above is located the Loa's Sanctum. The massive door in the upper levels of the pyramid leads to the Heart of the Empire, another throne room. A door behind it leads to a terrace overlooking the Port of Zandalar.