Artwork of the Dead Scar.

Composite map of the three in-game regions of Quel'Thalas, showing the path of the Dead Scar from Deatholme to the Sunwell.

The Dead Scar corresponds to the path of destruction that the armies of the Scourge led by the death knight Arthas Menethil left in their wake during their invasion of Quel'Thalas during the Third War. They marched all the way to the Isle of Quel'Danas, killing everyone and destroying everything in their path. The Dead Scar practically splits Quel'Thalas in half and goes through Silvermoon City itself. It begins at Deatholme, the Scourge headquarters in Quel'Thalas, and runs through the Ghostlands and across the Elrendar River into Eversong Woods. The path then continues across the woods and through the shattered main gates of Silvermoon, stopping at the coast of the North Sea. It then picks up once more on the southern tip of the Isle of Quel'Danas, before ending at the location of the Sunwell. 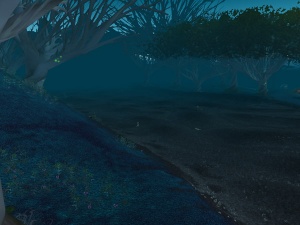 The Dead Scar in the Ghostlands, where it begins. 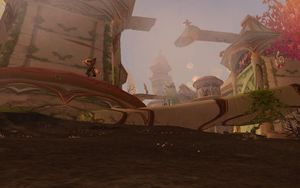 The Dead Scar on the Isle of Quel'Danas, where it ends.

The death knight Arthas Menethil was instructed by the dreadlord Tichondrius to bring the corpse of the necromancer Kel'Thuzad to the Sunwell, the source of the high elves' magic, in order to resurrect him in a much more powerful form. Transporting his remains in the urn of King Terenas, Arthas and the Scourge began their march across the Plaguelands of northern Lordaeron to the elfgates that protected the elven kingdom from invaders. The treacherous magister Dar'Khan Drathir betrayed his own people and helped Arthas through the gates. The undead forces subsequently destroyed all in their path, blighting the very land they trod upon. The path they took across Quel'Thalas remains burned into the soil to this day. Kel'Thuzad was eventually resurrected, and the Sunwell defiled, thus cutting the elves off from their source of magic.

The tainted soil of the Dead Scar draws undead to it and completely disrupts the energy in the ley lines beneath it.[1] The undead presence along the Dead Scar is considerable. Though they are fairly weak, their numbers are enough to keep the Silvermoon Ranger Corps busy fending off the undead marauders. In the recently named Ghostlands however, the undead were amassed behind the walls of Deatholme, where the traitor Dar'Khan Drathir and his lieutenants commanded the Scourge efforts in Quel'Thalas.

Along the edge of the Dead Scar at the East Sanctum in Eversong Woods, Apprentice Mirveda embarked in a dangerous line of research, one that her own former mentor had lost hope for. She ventured into the Dead Scar by herself to collect samples and see if it was possible to heal the defiled ground. She concluded that her endeavors were hopeless, for the very nature of the soil was altered, and deemed the taint irreversible.[2]

As discouraging as the research results were, they still contained valuable data. A magister needed to review her work before it could be taken seriously. Her mentor Magistrix Landra Dawnstrider found the notes shocking; if they were correct it would mean that the damage to the land on the Dead Scar is irreversible. If that were the case, she believed that it would be one more reason for her race to escape this world and find their true fate in Outland. She notified the Grand Magister right away.[3]

On the Isle of Quel'danas, eredar warlocks, wrathguards and pit lords in the service of Kil'jaeden fought in the Dead Scar against the undead remnants of the Scourge. At the northern end could be found the commander of the Legion forces Brutallus, verbally sparring with the blue dragon Madrigosa.

After the end of the Argus Campaign, the Windrunner sisters reunited in the Eversong Woods and traveled to the Ghostlands through the Dead Scar, fighting the undead, until they reached Goldenmist Village.[4]

During the Heritage of the Sin'dorei questline, the blood elven adventurer, accompanied by Lor'themar Theron, witnessed echoes of the past showing high elf defenders and their encounters and struggle against the Scourge and their ultimate demise by Arthas. They explored the surroundings of Deatholme and also went near the East Sanctum. On their way, they encountered corpses of high elven defenders (either lying on the ground or being impaled on a frozen spike) and ballistae, and also enemies.[5]