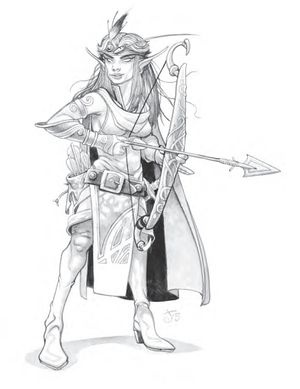 The dead shot is the hidden warrior, one part patience and three parts skill. They are the ones who serve as a line of defense, a patient assassin, or a failsafe in case a tense diplomatic meeting goes poorly. They are specialized assassins, able to slay with one painstaking shot from a rifle or crossbow. Although many associate the dead shot with the gun, many dead shots, notably night elves, are skilled with the bow or crossbow. They all share the qualities of a sharp eye and almost unnatural patience. The dead shot is skilled, of course, in specific ranged attacks, but they also have abilities that allow them to melt into the background, wait for hours on end for their prey to appear, and spot a sparrow in a tree three-hundred yards away.

Any race may pick up a ranged weapon, and any race may become expertly skilled in it. Still, most dead shots are night elf archers or Ironforge dwarf sharpshooters.

With the diminished numbers of the Alliance showing weaknesses, the dead shot has become quite necessary, as their stealth and range can allow them to kill several enemy troops before they can be found or reached. Dead shots prefer to work alone, but occasionally seek companions if they worry about the enemy discovering their location. Most dead shots are virtually worthless in melee combat.

Few dead shots are impatient. Where most people consider patience to be the ability to sit through long diplomatic meetings, or deal calmly with unruly prisoners, most dead shots make no rash decisions - no matter what. They are slow to anger and view every problem with a cool, calculating manner, acting only when they feel it necessary. This quality is useful in military circumstances, but in life dead shots prove to be infuriating individuals, devoid of passion or spontaneity.

Dead shots serve as backup to troops on the front line, or as the first line of defense, ordered to fall back if the enemy gets within a certain range. Although still lethal at point-blank range, the dead shot is not likely to live long if their enemies locate them. Those dead shots that join groups commonly travel with military units, and dead shots who favor guns enjoy the company of tinkers. Scouts and beastmasters, both classes that prefer solitary existence, also get on well with dead shots on a personal level. The rare dead shot who prefers company seeks it among verbose people, enjoying a good conversation to break up the hours of solitary hunting he must endure.

Above all, the dead shot must be able to concentrate on her target in order to fulfill her duty; she cannot become distracted. The dead shot remains hidden during battle. The dead shot’s closest friend is her weapon, and she knows it better than she knows any living being. The dead shot can make an lethal shot One Shot, One Kill.[1]

Dead shots in the world

Night elves favor the cover of night and their natural ability to shadowmeld, making them deadly predators lying in wait for their prey.[2]

Ironforge dwarves took their skill in engineering and made better and better weapons, naturally becoming the masters of their creations.[2]

Humans, as always, follow the other races and learn from their masters, so it is not out of place to see a sharp-eyed human with a crossbow or gun perched atop a tower, scanning the horizon.[2]

Half-elves prefer the solitary work conditions of the dead shot.[2]

Gnomes appreciate the freedom of ranged combat, as most prefer to keep out of melee - and some think the farther they are from combat, the better.[2]

High elves are rare dead shots, as they prefer magic as their ranged weapon of choice; but some hearken to their past and take up the bow, realizing that two hundred arrows are more readily available than two hundred spells.[2]