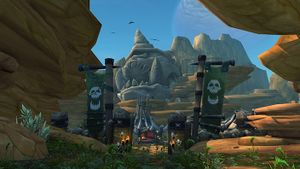 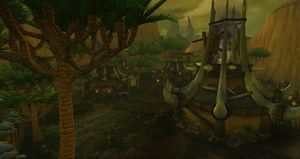 Deadgrin was a village and home to the Laughing Skull clan in southwestern Gorgrond. The skull of one of the earth giants looms above it. The goren, led by Skothwa and Tog the Earthrender, overtook the village, killing many villagers, and ultimately causing the orcs to abandon their home. The surviving villagers moved to the northeast where Broken Horn Village was built.

When the Horde adventurer and Eitrigg returned to Draenor, decades in the future, the area could be visited. While the lay out of the village was different, and the giant skull was no longer present, the village itself was roughly in the same location. Here, Grand Anchorite Almonen gave a sermon to several Mag'har, who, following the draenei's lecture, willingly converted to the Lightbound. Outside of these five inhabitants, the village was otherwise abandoned. Unlike Beastwatch, Deadgrin has not been revamped into the architecture of the Iron Horde.

The village is a Draenor Clans archaeology dig site.

It may have been considered the clan's capital prior to its abandonment.