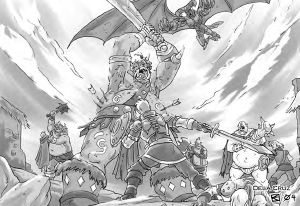 Deadhollow is a Human village in Silverpine Forest, ten miles southwest of Gaval Moch. Their folk have avoided most confrontations because the village was so small and useless that none wanted to bother with it. A band of ogres and Ganthrifal attacked the city, destroying most of it, but were defended by a band of heroes. The mayor of Deadhollow, Sammas Gomein, asked the heroes to check out Gavel Moch, to find out if the attacks originated from there. It is said the mayor likely renamed the village after one of the heroes that saved it, after they returned from their battle at Gavel Moch.[1]