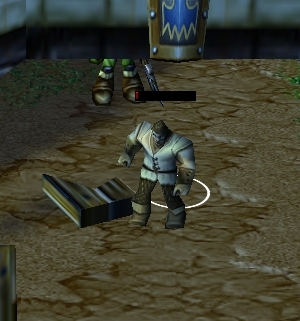 Dean was a villager who was seen escaping Strahnbrad when he was killed by two grunts of the Blackrock clan after the clan had attacked the settlement during the Third War. Arthas could not save him in time.[1] Dean's ghost can be seen in the graveyard outside the city.

Dean: Save us!
Grunt: He's escaping! Kill him!
Arthas: Damn! The attack has already begun! To arms, my brothers!

Although hard, the player can save him by using Arthas' Holy Light and then grouping the soldiers in a circle to stop the grunts from advancing to Dean. As previously said, it is not impossible but very hard to achieve, so players should save their games before attempting to. Saving him will, however, not change anything of the mission.