No matter how good an adventurer you are, eventually you will know the sting of death. Thankfully, death in the World of Warcraft isn't permanent.[1]

Death is a cosmic force that holds sway over every living thing in the Great Dark Beyond. Acting as a counterbalance to life, it is an unavoidable force that breeds despair in mortal hearts and pushes everything towards a state of entropic decay and eventual oblivion. It manifests in the form of necromantic magic and is represented by the Shadowlands, the realm of the dead.[2]

When a living being dies, their spirit is shepherded by kyrian into the Shadowlands. There, spirits face the Arbiter in Oribos, who judges their soul and places them in one of the realms of the Shadowlands, where they will spend their afterlife. The five main realms are Bastion, Ardenweald, Revendreth, Maldraxxus and the Maw, though countless others exist.[3]

On some occasions, a living being may go to a different place than the Shadowlands. For example, the spirits of the Wild Gods are bound to the Emerald Dream, where they go upon death.[4] Liches return to their phylactery.[5] Elementals killed outside their planes simply reform over time in the Elemental Plane. Most Stormheim vrykul are brought to the Halls of Valor by Odyn's Val'kyr.[6] Some vrykul may end up in Helheim, death realm for the vrykul. There they turn into kvaldir who work for Helya.[7] Sylvanas Windrunner raised new members to the Forsaken[8] including undead adventurers[9] with the aid of the Val'kyr. Other less fortunate souls may be raised into a necromancer's service.

Demons, when killed in mortal planes, are sent back to the Twisting Nether to reform.[2]

The Light can be used to bring the dead back to life (or undeath), as was the case with Calia Menethil.[10] The naaru are also able to bring mortal souls to the Light like A'dal did with Bridenbrad in order to save him from undeath.[11]

If a being of Death is killed on the mortal plane, their essence returns to the Shadowlands to be reformed, similar to how demons reform in the Twisting Nether.[12] However, if such a being—either the soul of a former mortal or a member of an endemic Shadowlands race—is destroyed in the Shadowlands, they die permanently. Their energy then disperses and joins the greater whole of the magic of Death. This is the case both for souls of former mortals and for endemic Shadowlands races.[13][14][15] If a "workforce" creature like a dredger or steward dies, another member of the same race will eventually manifest to take the place of the one that was killed.[16][17]

Most servants of death on Azeroth are undead with a few major characters listed below.

The trolls believe that Bwonsamdi brings the spirits of any who worship him into his realm; the Other Side.[20] Bwonsamdi grows more powerful, the more souls are in his care.[21] When a troll of the Darkspear tribe die they get cremated on a ritual pyre and their ashes are stored within an urn. A notable case can be seen during Vol'jin's funeral.[22] The Zandalari trolls also cremate the dead. This tradition started after the Plague of corrupted blood broke out and the bodies were too polluted for proper burial. In time this practice turned to tradition among the majority of the Zandalari.[23] Not all are cremated, however. The royalties and most respected trolls are taken to Kings' Rest where some of them are kept as mummies. Unlike the Zandalari and the Darkspear tribes, the Sandfury trolls don't worship Bwonsamdi but another loa of death by the name Mueh'zala.[24]

The tauren consider death to merely be the shadow of life and hold that the ending of things is as natural as the birth of them.[25] In addition, they believe the dead who have been honored may pass to the spirit world.[26]

As the Forsaken are already dead and turn into undead because they have free will so the experience when a Forsaken accepts his or her death willingly is their last death.[27] This should not be confused with True death which is a punishment in the form of an "execution". This method turns Forsaken into mindless undead, and can be used against those who threaten their way of life.[28][29] This punishment is also used against those who commit high treason against the Forsaken's leadership.[10]

A typical out of body experience in Azeroth. 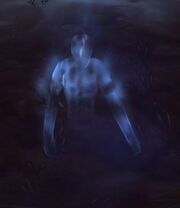 A player in ghost form in the Shadowlands.

Death is the state a character is in when their health reaches zero (or less). When a player dies, they are unable to take further actions until they release their spirit or are resurrected. Dead players leave a corpse at the location where they died.

Upon dying, the player is presented with two options: Release Spirit and Recap. The Death Recap Screen provides a short list of the most recent sources of damage, allowing the player to review their cause of death. Repeated deaths within a short time will cause a "resurrection timer" to appear, which temporarily grays out the Release Spirit button (likely to prevent zerging). After 6 minutes the player's spirit will automatically be released.

When the player's spirit is released, they will turn into a spirit form (a ghost or, in the case of night elves, a wisp), which spawns at the nearest graveyard. A player in ghost form appears as a blueish-gray, transparent version of their normal model (with the exception of Shadowlands zones, where all players instead appear as featureless humanoid souls). As a ghost, you will only have 1 point of health. Death will automatically remove all Buffs and Debuffs from the character, except for the "ghost" debuff, which is applied, and certain Flask effects that persist through death.

A character will stay dead until they are resurrected. This can be achieved through returning to their corpse as a spirit; by the spirit healer at a graveyard; by a player character near the corpse; or by using an item such as

While you are dead, there are some interesting graphical effects. The sky looks like a whirlpool, and everything you see gets a little more grey. This is called the spirit world and is lore-wise one of the many "planes" in the Warcraft-universe.

If you die in an inaccessible area, such as falling off Outland or far past the Fatigue limit in the ocean, your ghost may not be able to get close enough to your corpse to rejoin it. In this case, you will have to resurrect at a graveyard (when falling off of Outland, the corpse of the player usually is placed at a reachable area on the edge somewhere. It may, however, place the corpse in an unpleasant location).

If you die in an instance and release your spirit, you will be teleported to the nearest graveyard. From there, you must run back to the instance and reenter it to be able to recover your corpse. Upon reentering, you will instantly be revived without having to fetch your corpse, no matter where you died in the instance. Naturally, you will also be returned to the place where players begin the instance - this makes it impossible to corpse run past mobs in instances. Some instances have portals at the start which can teleport players to locations within the instance to save time. Something else to note is that when you are dead, you can pass through any gates, barriers, and instance doors (if any).

The term "corpse running", aka "ghost running", originally described an exploit to travel to certain areas while dead (thus being immune to damage) but now refers to the distance a player would have to cross from the graveyard to their corpse. This may even have an effect on how willing players are to reattempt entering dangerous areas. For example, dying in Blackrock Mountain-instances previously sent the player to the graveyard at Thorium Point, which is located on nearly the other side of the zone. As a result, many players were hesitant to play in that location with inexperienced players because it could cause repeated deaths and the time-consuming run back. Later, (possibly in Cataclysm) the location was placed at Forgewright's Tomb which made the distance much shorter.

Durability as a ghost

From Death section of the New Player Guide:

Upon dying in World of Warcraft, all of your equipped items immediately take a 10% durability reduction (this applies only to items equipped when you died, not to items in your inventory). You have a few minutes in which to be resurrected by a player, or you may release yourself to the nearest graveyard as a spirit. While in spirit form, you can run back to your corpse and rejoin it for no additional penalty by selecting the "Resurrect Now" button when you come within range; you come back to life with half health and half mana. Run speed is increased to 125% of normal while you are a spirit (night elves have a special racial ability called

[Wisp Spirit] that gives them even more speed) and you are able to walk on water.

Your ghost can breathe underwater in lakes, rivers, coastal waters, and even lava, but if you swim into the deep ocean your ghost can still, ironically, die of Fatigue. Dying while already being dead will return you to the graveyard.

Exceptions to the rules on durability loss

If you are killed by another player in PvP combat, you do not take the initial 10% durability hit. However, you will still take a 25% hit and suffer from resurrection sickness if you are resurrected by a spirit healer. Also, during the Second Scourge Invasion event, there was a glitch, when you stayed long enough as a zombie, you would NOT take durability damage.

[Demonic Rune] — then you will not suffer any durability damage to your armor or items unless you are resurrected by a spirit healer.

The spirit healers present in each graveyard can bring you back to life immediately, saving you a trip to your corpse. However, doing this will cause all of your equipable items to take an additional 25% durability hit; this applies both to equipped items, and to items in your inventory. In addition, you will suffer from

[Resurrection Sickness]. This sickness decreases all of your attributes and damage dealt by 75%, and has a duration that varies depending on your level:

Since patch 2.4, players that have the resurrection sickness-debuff will be worth no honor when killed by a player of the opposite faction.

In some zones, spirit healers are replaced by other NPCs who offer the same functionality, such as Prime Naaru on Argus or Spirit Obelisks in the Shadowlands.

There are a few quests that can only be accessed while the player is dead. Those quests start by talking to an NPC (non-player character) who is only visible and accessible while in ghost/wisp form. On a side note, if one levels due to turning in one such quest, they shall regain all their life and mana but will not resurrect (which is a bit weird).

Without shader support, the death experience is a little less gray

Argus may be the Titan of Death as Eonar is the titan of life as some of Argus' spells in the database are labeled "deathtitan". His Grasp of the Unmaker ability was also originally called Grasp of the Death Titan.[30]