This article is about the death knight ability. For other uses, see Death Coil (disambiguation).

The icy embrace of death can be beneficial...for those who know how to control it.[1]
Those who have shunned the Light are welcomed with open arms by the shadows.[2]

Death Coil is a level 55 Unholy death knight spell that unleashes some of the death knight's Runic Power to damage an enemy target and restore energy to their ghoul. 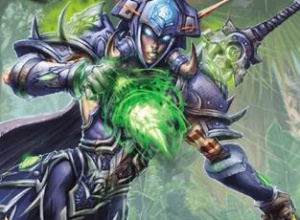 Death Coil is an iconic death knight ability that was first used by the Death Knight unit in Warcraft II, and was subsequently used by Death Knights in Warcraft III, and the tabletop RPG. In World of Warcraft, a variation of

[Death Coil] was given to the warlock class.

Death Coil is a particularly potent variation of the Touch of Darkness spell. By channeling the necromantic powers of the underworld through his ghoulish form, the Death Knight creates a field of dark energy that drains the life-force from any who come in contact with it. This life-force is then consumed - thereby replenishing the strength of one so enchanted, be he friend or foe. The icy embrace of death can be beneficial...for those who know how to control it.[1]

Death knights can call upon the forces of darkness at will, causing bolts of death to issue from their hands. While doing considerable damage to the death knights’ enemies, the Death Coil also heals their undead brethren.