Death From Above (short story)

For other uses, see Death From Above (disambiguation). 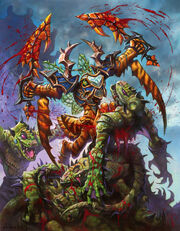 Death From Above is a short story by Robert Brooks that is featured on the official site.

Every century, the mantid swarm the Serpent's Spine. Most die. Some live. Only a rare few become legends. During the height of the mogu empire, one mantid struck fear in the hearts of slaves and taskmasters alike: "Wind-Reaver."