For the pre-Cata version, see

[Armguards of the Good Captain]
or

[Legguards of the Promising Hero]
or

Protect Shakes O'Breen during the attack.

This is bad. It seems the Daggerspines are amassing for an attack.

Naga are known for their ruthlessness in battle. They will keep attacking until I am dead.

I don't value my own life above that of my crew members, but you must help to defend me. The crew will not be able to make it back to Booty Bay without my knowledge of the seas.

The naga will be coming from the sea. I need you to remain up here with me to fend off the attack. Man the cannon and drive them back.

We survived the attack!

We could not have done it without you, <name>.

We'll be heading out as soon as the tide rises. If you weren't such a promising hero I'd offer you a place on my crew. But I can tell you have bigger fish to fry. 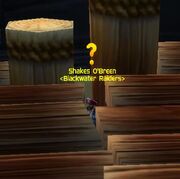 During the encounter, you might find Shakes taking cover between the deck planks.

Shakes O'Breen yells: All hands to battle stations! Naga incoming!
Shakes O'Breen says: If we can just hold them now, I am sure we will be in the clear.
Daggerspine Marauder yells: Nothing will stop us! You will die!

The cannon is on the deck of the ship (which you're not on when you accept the quest...). The naga will come from overland to the southeast. Firing the cannon (clicking on it) while they are on their way will kill them. You may need to kill the few naga who reach Shakes O'Breen by hand.