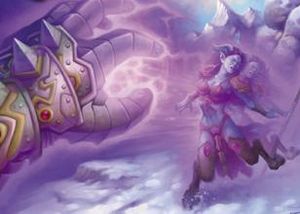 "I find your excess of resistance disturbing." - Vanessa Fairgraves[1]

Gripping a target will interrupt any cast currently in progress. This can be used to great effect in PvP, interrupting healers or preventing node captures. Casting will be interrupted even if the target is barely moved, such as when engaging a caster at point-blank range.

This is a great way to make your group like you. Caster mobs are difficult for a tank to deal with. Stand next to the tank and grip the caster over. Then switch to another target, letting the tank's AoE abilities build threat on the caster. It's now safely tanked.

Using Death Grip on a warrior with