These soldiers of darkness were created by Gul'dan to replace the slaughtered Warlock clans. Assembled from the corpses of the Knights of Azeroth slain in the last battles of the First War, these abominations were then instilled with the ethereal essence of the Shadow Council. Further empowered with magical energies culled from the slain Necrolytes, the Death Knights wield an arsenal of necromantic and elemental spells that mete out all but certain death to the enemies of the Horde.[1]

By enveloping their truncheons with the dark essence of Hel, the Death Knights are able to deplete vital energies from those they lash out against. Their ability to discharge this energy over short distances makes this a menacing attack. Although the effects of this spell are abhorrent to the living, the Touch of Darkness is a[sic] but a lesser enchantment within the arsenal of these vile horsemen.[2]

Death Coil
Powerful attack that heals back the caster

Death Coil is a particularly potent variation of the Touch of Darkness spell. By channeling the necromantic powers of the underworld through his ghoulish form, the Death Knight creates a field of dark energy that drains the life-force from any who come in contact with it. This life-force is then consumed - thereby replenishing the strength of one so enchanted, be he friend or foe. The icy embrace of death can be beneficial...for those who know how to control it.[2]

By magically increasing the speed at which a body generates vital energy, the caster may bestow great speed to any being. All actions taken by one so enchanted are swifter than a common adversary - an advantage that is evident on the battlefield. The effects of Haste can persist for but a short time.[2]

This ancient Necromantic spell transforms a portion of the recipient's life force into an unearthly, phantasmal suit of armor. This spectral armor then absorbs the damage from any attack directed at its wearer for a limited amount of time. As the magiks that link this armor to its host cease, so will the invulnerability that it grants.[2]

The aphotic, swirling clouds conjured by the Death Knights can cause anything within their path to rot and decompose. The vapor created by Decay can consume anything - flesh, bone, wood or even the strongest metal. Heavily laden with base substances, these clouds descend and quickly diffuse, leaving only suffering in their wake.[2]

Whirlwind
Summons an uncontrollable but power whirlwind over an area

This focusing of the winds of the underworld causes any caught within to be cast about with great force and violence. Bones are easily shattered and mainsails are quickly snapped within the torrents of these fierce winds. The howl of these winds allow no commands to be issued to those trapped within the Whirlwind, rendering those unfortunates helpless until the magiks fade.[2]

Raise Dead
Summons the controllable skeleton of a dead unit

This dark magik is the final legacy of the Orc Necrolytes who were destroyed shortly after the First War. The Death Knight can animate corpses of the newly dead and then command these monstrosities to attack their enemies. This terrifying spell is the paramount power of the Death Knight as it serves to augment the Horde forces with vast armies of the Undead.[2] 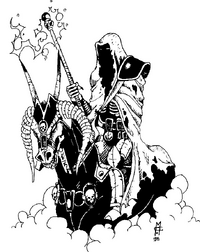 A death knight from the Warcraft II: Tides of Darkness manual.