From Wowpedia
(Redirected from Death Rune)
Jump to: navigation, search

The rune system is the resource system used by death knights, much as mana, energy, rage, fury or pain are used by other classes, or focus is used by hunters and their pets.

The death knight's rune system consists of two very distinct but complementary resources: runes and runic power. Some of the death knight's spells and abilities require spending runes; others require them having generated through battle a certain level of runic power. Every death knight who has not recently been in combat enters a fresh combat situation possessing six expendable runes but no runic power. Only by spending some of these runes (each of which regenerates after a short time) on battle abilities may the death knight thereby acquire and incrementally build up for a short time runic power, which in turn they may draw on for other spells. The death knight's rune system thus combines characteristics of those classes relying for combat powers on depleting-but-renewable resources — such as mana (mages, warlocks) and energy (rogues) — with those classes relying for combat powers on resources generated solely through battle itself, such as rage (warriors). 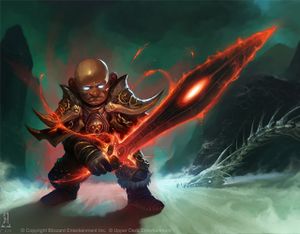 A Blood Rune being used in the TCG.

Before using any abilities, the death knight has six runes. Different abilities and spells consume different amounts of runes and, when used, will place one of the used runes on cooldown. Some abilities are able to refresh certain runes;

[Empower Rune Weapon] will refresh all of them simultaneously;

[Runic Corruption] gives a chance to refresh a rune when using runic power.

Runes have a base cooldown of 10 seconds, which is then reduced by haste (for example, 25% haste would give your runes an 8 second cooldown).

Runic power is an extra resource that builds up as the death knight use their abilities, displayed as an empty bar that fills up with a light sky blue color similar to rage under the death knight's health bar. Generally, offensive rune abilities generate 10 runic power per rune required to use that ability. Additionally,

Developers stated at BlizzCon 2007 that they didn't want the new class to use the traditional resource systems because they wanted the death knight to have a different style of play. They stated their intention was for the death knight to use a mixture of spells and melee in close combat. Because of this, a system that didn't specifically rely on either mana or rage was more appropriate. In early design, the Death Knight was intended to be able to customize how many of each type rune they wished to have in their 6 rune slots. This was eventually removed and replaced with the current two-of-each-type system due to concerns about balance and complexity.

This is how the original icons looked:

During the 2008 Worldwide Invitational, it was noted that the original runes were replaced because they were too complex to show them refreshing inside the character's portrait bar.

This is how the replacement icons looked: