The death knight is available to all races introduced prior to Mists of Pandaria, on any server.[1] When originally released, only one death knight could be made per server, and only if the player already had a level 55 or higher character on that server; the latter restriction was mostly lifted in patch 3.0.8, while the former was removed in patch 5.3.0. In patch 6.0.2, the restriction of having a level 55 on your account was removed. Since then, death knights can now be made on any server, no matter what level character you have on your account.

As the Lich King did not discriminate when raising those who fell against him, almost any race can be a death knight.

The Cataclysm races, worgen and goblins, are also allowed to become death knights. Worgen death knights were former followers of Arugal in Silverpine Forest, whereas goblin death knights originated with the Steamwheedle Cartel.[2]

With the ascension of Bolvar Fordragon as the Lich King, and in the events leading up to Shadowlands, all races including pandaren and allied races can be playable death knights. These death knights have a different starting experience from those death knights raised by Arthas.

Draenei are likely the most religious, orthodox and faithful race that currently reside on Azeroth. As such, death knights are considered disgusting, abominable and unholy by most draenei. A death knight of this race may have to look elsewhere for home, as toying with undeath is reviled by draenei. However, draenei make some of the most vicious and deadly death knights. With the loss of the Holy Light, the one thing that draenei all share, they may develop a disregard for geniality or mercy. A caring but strong race with all mercy removed creates a deadly and intimidating presence on any battlefield, and draenei death knights are a force to be reckoned with.

The views of dwarven death knights may be different depending on their clan. Ironforge dwarves regard the undead similarly to humans, as they are also followers of the Holy Light. Wildhammer dwarves have a deep connection to the earth and therefore it would be a struggle for a death knight of this race to live amongst former brethren. Dark Iron dwarves would likely be the most accepting, as their culture revolves around sorcery and using what they have to fight, and death knights may feel more welcome in this society. Much like humans, the Lich King valued dwarves for their stoic nature and high body strength.

Although not considered a race of raw strength or might, becoming a death knight for a gnome may be just another adventure or experiment much like blowing up a Horde encampment. The gaining of unholy strength also augments the strength of gnomes, allowing them to be lethal and still incredibly agile. This added strength, the gnome archetypal insanity and a wanton disregard for safety make the gnome death knight just as deadly as any other race. Do not underestimate them. 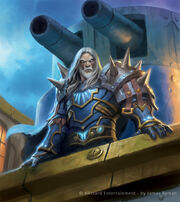 Many of the human death knights were holy crusaders or veteran soldiers of human kingdoms that fell in battle in their war to end the profanity of the Scourge. The Lich King raised these fallen champions in undeath as death knights to serve him. Humans are one of the most adaptable races, being proficient in magic and combat. Human society has a foundation in the Holy Light, and having that taken away could be problematic. Nevertheless, humanity has a history of sympathy when it comes to extreme circumstances and as such would be willing to accept death knights into their ranks as they would any other profession. However, one must remember the revilement and hate some highly orthodox followers of the light may have against death knights, as the hatred for Arthas and the Scourge runs deep in human society.

When the paladin ranks were disbanded during the Third War by the failing Alliance, many of these human holy warriors traveled to the quarantined lands to ease the suffering of those left within the plague-ridden colonies. Though the paladins were immune to disease of any kind, they were persecuted by the general populace who believed that they had been infected by the foul plague. A small band of paladins, embittered by society's cruelty, traveled north to find the plague's source. These renegade paladins succumbed to bitter hatred over the course of their grueling quest. When they finally reached Ner'zhul's icy fortress in Northrend they had become dark and brooding. The Lich King offered them untold power in exchange for their services and loyalty. The weary, vengeful warriors accepted his dark pact, and although they retained their humanity, their twisted souls were bound to his evil will for all time. Bestowed with black, vampiric Runeblades and shadowy steeds, death knights serve as the Scourge's mightiest generals.[4] 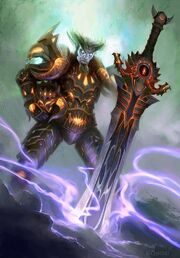 Due to a connection to the natural world, it may be hard for a night elf death knight to wander near their brethren without challenge or dismay. Nevertheless, night elf death knights are agile, unfaltering and beautiful to behold. Their severance from the natural world may drive night elves to become more bloodthirsty when turned to undeath, easily striking fear into the bravest of warriors. Grace combined with unholy magic makes night elves one of the most unpredictable and persistent races to fall to undeath.

A bloodthirsty, savage, intelligent and lethal race, the worgen who were raised from Arugal's dead are an intimidating presence to behold. With the strength of wolves combined with unholy and frost magic, worgen are augmented beyond what some mortals could hope to achieve. Unlike Gilneas City worgen, those who were raised from Arugal's batch are likely to be more bloodthirsty and potentially reckless. As such, they are a danger to behold on the battlefield and in a frenzy, even allies may want to keep their distance.

With everything the blood elves have suffered through in the past, it was inevitable that the grimmest of the death knights would come from their ranks. Their nature and the grim mark that the Scourge left upon their lands instantly make them a target of spite from their own kin, and the loss of the Light from even the rejuvenated Sunwell has turned many into little more than hollow shells. Turning away from everything they once held dear and fought for in life, many seek only the companionship of their fellow Knights of the Ebon Blade, regardless of what race they herald from.

Hailing from the Steamwheedle Cartel rather than the Bilgewater Cartel, goblin death knights are just as likely to go their own way as they are to join the Horde with the other death knights for safety in numbers. As with gnomes, their short stature makes them an odd choice, but with even less regard for safety and caution than gnomes, backed by unholy strength they are a force of destruction to be reckoned with. Though likely dismayed or even disgusted by what happened to them, many goblins may come to consider the state something of a boon, with their new powers opening new avenues for gathering all kinds of wealth.

From the orcs came the first death knights. These soldiers of darkness were originally created by Gul'dan to replace the slaughtered Warlock clans during the Second War. Assembled from the corpses of the Knights of Azeroth slain in the last battles of the First War, these abominations were then instilled with the ethereal essence of the Shadow Council, and further empowered with magical energies culled from the slain Necrolytes.[5]

Though the powers associated with these knights of death has changed over time, the orcs have not forgotten that black mark on their history. The Lich King is making use of orcish death knights once again by forcibly raising fallen orcs into death knights of the Scourge. As with warlocks, they are tolerated but never truly accepted into orcish society, and watched with wary gazes by all they pass. The orc death knights themselves, however, have not lost all traces of what they once were, and many seek the honorable death stolen from them by the Lich King. They remain loyal to their people and to the Horde against all odds and seek to aid both with the dark powers seeping through their undead bodies.

Much like the night elves, a tauren death knight may find it difficult to return to their living kin due to their condition's separation from the natural world. Though there are some who would accept them in their new condition, many, especially in the druid circles, revile them. Even so, tauren death knights have displayed the ability to remain compassionate and caring for the living in spite of their condition, though many more fall to the darkness in their dead souls and the violence that comes with it. Because of their powerful stature, they are among the strongest of the death knights.

The Darkspear tribe has a deep reverence for their dead, and Bwonsamdi (or Samedi) is known to have a deep hatred for the undead he sees as abominable. Because of this, troll death knights are likely to find no comfort with their old kin, and may be driven deeper into the Ebon Blade or even to the Forsaken in the search for some kind of companionship. The troll death knights themselves may agree with their living kin, or they may see their return to the world in undeath as a sign of some greater mission bestowed to them by their loa gods. 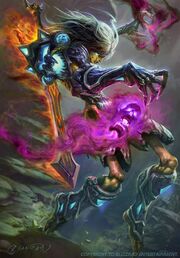 No strangers to undeath, those Forsaken turned into death knights may exhibit no changes in attitude and personality; they were damned before, they are damned still. Alternatively, a second brush with death and raising from it may have killed off whatever remained of the humanity within the Forsaken individual and they may be even more reclusive and emotionally dead than the typical member of their race. As a whole, the Forsaken tend to be more accepting, though not sympathetic, towards their brothers in death, and this may extend to even those death knights of other races.

There is at least one pandaren death knight, Gravewalker Gie. She was likely a wandering explorer who got caught up in the war in the Plaguelands.