This article is about the strategy for defeating Deathbringer Saurfang in Icecrown Citadel. For his character biography, see Dranosh Saurfang. 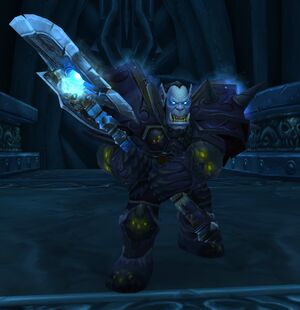 Deathbringer Saurfang is the fourth boss in the Icecrown Citadel raid. He is described as being the Lich King's most powerful death knight.[1] It's mainly a DPS race with an interesting twist (Blood Power).

After falling to Frostmourne at the Battle of Angrathar the Wrathgate, Dranosh Saurfang was raised in undeath by the Lich King and brought to Icecrown Citadel. Imbued with the power of the Scourge, the Deathbringer bars the way of any attackers trying to enter the Upper Spire.

This fight can be reset by running back on the gunship while it's still there - it despawns after some time.

The fight has only one phase. Saurfang does hard enrage after 8 minutes. At 30% there's a soft enrage (Frenzy), DPS cooldowns are normally saved for that point (although some raids have success using them early, and thus delaying the first Mark as long as possible).

Saurfang starts with 0 Blood Power. He can accumulate up to 100 in his Energy bar (akin to death knights). He gains Blood Power whenever one of his special attacks hits or ticks. When Blood Power reaches 100, he casts Mark of the Fallen Champion on a random raid member, resetting his Blood Power to 0.

Each active Mark increases the rate at which he gains Blood Power. For this reason, it's imperative to limit the amount of Blood Power he gains. Saurfang should be at 60% or lower before he casts the first Mark.

Saurfang should be tanked right where he spawns, his melee damage is not high. Tanks must pay attention though that Saurfang doesn't gain Blood Power from Rune of Blood . If a tank gets it, another tank must quickly taunt and take over. The debuff lasts 20 seconds.

The melee should stand right on Saurfang. Ranged damage dealers can stand closer to the boss, while healers should be furthest away. Healers need to be well spread out, so that all raid members are in range of several healers.

All non-melee raid members must stay at least 12 yards away from each other to avoid activating Blood Nova , else Saurfang receives extra Blood Power.

Saurfang gains Blood Power whenever a Blood Beast deals melee damage, thus they must be slowed and kited, and killed by ranged DPS. Since Blood Beasts are resistant to AoE it's pointless to use such abilities. Melee in particular should avoid using any multi-target abilities (such as

[Hammer of the Righteous], or

[Divine Storm]) in order to avoid drawing aggro. The Blood Beasts must leave the platform ASAP (in hard mode they're also likely to one-shot melee).

Blood Beasts are immune to crowd-control. They are susceptible to root, snare, slow and stun. Be careful not to root them within melee range of anybody. Classes with a root, snare, or stun ability should use this macro whenever the Blood Beasts spawn:

This immediately uses the ability on the closest Blood Beast and then targets Saurfang.

The Beasts normally aggro healers after some time, therefore healers should stand away from the boss. Alternately, healers can stand on the platform among the melee. Initially the Beasts can be pulled away by the DPS pretty easily, later on they move back towards the platform when they aggro a healer. At this point, it helps a lot if the healer can temporarily reduce aggro, such as a priest using

Ranged DPS should target the beast furthest away, and as soon as the beast gains aggro, switch away to another one. Ping-ponged between different ranged DPS prevents anyone from being hit in melee. Melee players (or the tank) can help by taunting Beasts that are far away from them. If a Beast gets close to its target, that target must run away and start kiting — do not let them hit anyone.

If the raid is too melee-heavy, it is possible to stunlock one Beast and kill it with melee, while the other beasts are kited by ranged.

These abilities are particularly helpful for slowing down Blood Beasts:

Saurfang casts Boiling Blood on random raid members. This can easily be healed through. Every tick grants Blood Power.

[Blessing of Protection] removes it, though that should only be needed in Hard Mode on a player afflicted with Mark of the Fallen Champion .

Mark of the Fallen Champion

Whenever Saurfang gains 100 Blood Power, he casts Mark of the Fallen Champion on a random raid member. This debuff inflicts heavy damage (about 6,000 per second in 25 player) and yields a lot of Blood Power to the boss. When a player with a Mark dies, this heals Saurfang about 5%. The Mark persists through death—do not combat rez a player that dies from it.

A good healer can handle about two active Marks if focusing exclusively on the Mark targets. Two active Marks in 10 player usually lead to a wipe, in 25 players the limit is about 8 Marks.

It may be a viable tactic to let the Mark of the Fallen Champion victims die. It's much easier to deal an extra 5% damage to Saurfang than to heal the Mark victim and deal with the increased frequency of future Marks. There are diminishing returns however, as living DPS are required to take down the Blood Beasts.

The primary differences of Heroic mode are a shorter enrage timer (6 minutes), Blood Beasts catching Scent of Blood 5 seconds after spawning, reducing the movement speed of the entire raid by 80% for 10 seconds, and Saurfang healing for 20% HP upon a mark of the fallen champion death. His blood power gain is also much faster compared to normal. Blood Beasts also hit hard enough to one shot any non tank.

On a first kill, prepare for at least two marks on 10-man and six marks on 25-man. Assign one dedicated healer per mark. If healers are struggling towards the end of the fight, they can stop healing one of the tanks because of the mechanics of Rune of Blood .

Speaking with Muradin Bronzebeard
'Twas a fierce battle, <name>! Take a moment to rest and gather yer forces. Who knows what lies beyond that door?

Let me know when yer ready and we'll begin our ascent into the upper reaches of the citadel.

Are ye sure, <lad/lass>? Ye don't need another minute or two?

Speaking with High Overlord Saurfang
Brave soldier of the Horde. I salute you! We would have surely been destroyed by the Alliance gunship had it not been for you and your allies.

Take a moment to rest before we begin our assault upon the upper reaches of the citadel.

We are ready to go, High Overlord. The Lich King must fall!

Are you sure, <name>? We must face the Scourge at full strength if we are to succeed. If you do not require more rest, we will begin.

Casting Mark of the Fallen Champion
The ground runs red with your blood!

Speaking with Muradin
We got the final barrier blockin' entry to Frostwing Halls down, <lad/lass>. Only Sindragosa stands between the Lich King and divine retribution! What are ye waitin' for?!

Speaking with Saurfang
All barriers are now down, <name>! Only Sindragosa stands between the Lich King and us. Justice comes soon...