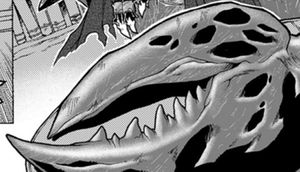 Deathclasp is a hostile level 54-55 elite named scorpid found in Silithus. Deathclasp used to be guarded by two other scorpids until Patch 4.0.3a. She is not tameable by hunters.

The terrible Scorpid, Deathclasp, was believed to have retreated to the southern mountain ranges of Silithus in the presence of increased silithid activity. She presented a great threat to patrols and expeditions in the southern regions of Silithus. She blocked the southern mountain ranges which the Cenarion Circle would like to use as a strategic path to circumvent the silithid hives. She was killed by the forsaken warrior and adventurer Barnabas Grell, who turned in her pincer as proof at Cenarion Hold.[1]