Deathstalker Commander Belmont is a Forsaken Deathstalker commander, who appears in Silverpine Forest, deployed there during the invasion of Gilneas. He is also found in Shadowfang Keep, and serves as its primary quest giver for Horde players. 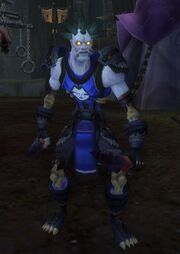 Belmont briefing a unit of deathstalkers 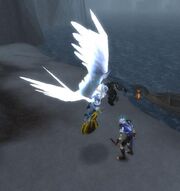 Belmont first appears within Forsaken High Command, having sent Deathstalker Rane Yorick to scout information on the Gilneas Liberation Front's movements within Forsaken territory. Following Yorick's mission compromise and subsequent death at the hands of Ivar Bloodfang, Belmont has her report handed over to the Banshee Queen - revealing an uneasy alliance between the Gilneas Liberation Front and the Bloodfang pack.

Belmont and the Val'kyr Arthura later relocate south to the Forsaken command post in the Ruins of Gilneas, where intensive fighting was going on against the worgen. They leave shortly before a besiegement by the Bloodfang - now also supported by the 7th Legion to Emberstone Village. The two of them and the player fight their way to the corpse of Lord Godfrey, whom Lady Sylvanas has plans for. Arthura and the player make their escape with his corpse, while Belmont remains behind, confident that he can make it back to the basecamp. However, during the flight back, a large number of howling worgen are seen overlooking the lone Belmont.

Despite his apparently grisly fate, Belmont was able to escape his predicament, and following the Forsaken victory in Silverpine is out for revenge - on the treacherous Lord Godfrey, who had shot Lady Sylvanas from behind in his absence. Belmont, along with a regiment of Forsaken Deathguard troopers and blightspreaders, now resides inside Shadowfang Keep, keen to show Godfrey the wrath of the Banshee Queen.

After clearing the dining hall, High Warlord Cromush appears, and "reminds" Belmont that use of the fully powered plague is forbidden. Belmont quickly assures him that this version serves as little more than a worgen repellent, though tells the player that "unsurprisingly" they are not going to pay much heed to Cromush's opinion on the blight, and thanks them for "keeping quiet" about its true potency. He later finds Cromush, who is wounded by Godfrey's poison, and ensures nothing interferes with the battle against Godfrey.

Belmont is seen within the sewers of Dalaran in the secret Hall of Shadows. He is found at the bar talking with Wailing Mary Smitts. 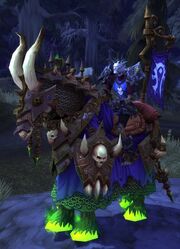 Belmont fought in Darkshore following the War of the Thorns. He first confronted Shandris Feathermoon, Maiev Shadowsong, and an Alliance adventurer at the Ruins of Auberdine, but Maiev slew his forces and drove him off. He later encountered Tyrande Whisperwind herself, now the avatar of the Night Warrior, at the Ashwood Depot. While he taunted Tyrande that the entirety of Darkshore would soon bolster the Forsaken's armies, Tyrande slew Belmont's forces then froze Belmont in place with Elune's magic and left him to rot.[1]

Belmont was later held captive by the Druids of the Branch alongside Master Apothecary Faranell. He was freed by the Horde and participated in the Battle for Darkshore. When the Horde controls Darkshore, he can be found at Bashal'Aran.

During the Battle for Darkshore

Our mission is clear. We must not fail.

Nothing can stop the wrath of the Banshee Queen.