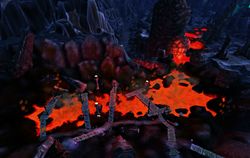 is located in the lower shelf of Deepholm, southeast of The Blood Trail and Temple of Earth. This is where Deathwing landed when he fell into Deepholm through unknown means after his defeat in Day of the Dragon before being moved to the Stonecore.

Now the Twilight's Hammer are wielding foul magic here. They animate and energize the remains of Deathwing's blood, so that instead of drying out and disappearing it thrives and becomes more abundant.[1] The cultists harvest and shape the corrupted blood he left behind into living organisms to draw from their power.[2]

A quarry is present on the outskirts of the area.

In quarry on outskirts