For the island from alternate Draenor, see Ashran. For Deathwing's former lair in Azeroth as the Earth Warder, see Neltharion's Lair.

Map of the Hellfire Peninsula, Devouring Sea and Skeletal Coast regions of Draenor, including Deathwing's Lair. 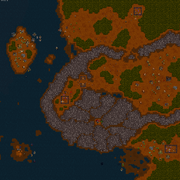 Deathwing's Lair during the Invasion of Draenor.

Deathwing's Lair was the name given to the mountain isle of Ashran[1] during the Invasion of Draenor. It was later razed, forcing the dragon to return to Azeroth.

When Deathwing briefly relocated to Draenor in the aftermath of the Second War, the great black dragon built a new lair on a rocky island a short flight east of Hellfire Peninsula and the Skeletal Coast. The roost itself was in a mountain.[2] The area was attacked by the Alliance Expedition to find the Skull of Gul'dan that lay within the lair and if possible, to destroy the great dragon.[3]

Several orc groups lived on the island and offered captives from the war as sacrifices to Deathwing.[3] Luckily, Kurdran and Sky'ree were both there after their capture by the Horde and were saved by Archmage Khadgar and Alleria Windrunner. Deathwing eventually retreated from the combat and returned to Azeroth.

It is unknown what happened to the isle after the destruction of Draenor and the appearance of Outland.