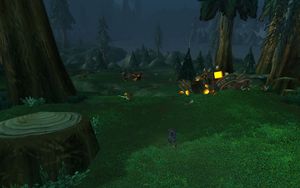 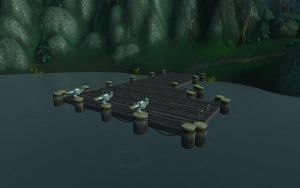 The Decrepit Fields, formerly the Decrepit Ferry, is an area in Silverpine Forest located between the Sepulcher and Fenris Isle, on the shore of Lordamere Lake. It has become home to a large number of Hillsbrad Worgen who chose to seek vengeance against the Forsaken rather than be raised into undeath. A number of ruined Forsaken catapults are located here.

Warlord Torok made the mistake of sending his Orc Sea Dogs to fight the Hillsbrad forces without providing them with adequate alcohol. They now lie unconscious on the ground. He will send players to wake them up while Sylvanas has you deal with the worgen.

At the end of the fields along the shoreline exists a pier that once had a ferry filled with corpses. The pier now has a Horde Communication Panel and three Horde Cannons on it, along with Killian Sanatha whom apparently was of no interest to the waves of newly transformed worgen refugees, as he still stands on the pier fishing, unmolested. Fenwick Thatros, a rare spawn, can be found here as well.