Deepholm[1] (also called Deepholme[2]) [diːphoʊm] is one of the four regions of the Elemental Plane. It serves as both home and prison for the earth elementals, ruled by Therazane the Stonemother. Besides Therazane and her elementals, the Earthen Ring has also made Deepholm its temporary home. Stationed in the Temple of Earth, they are attempting to mend the wound Deathwing opened. In World of Warcraft: Cataclysm, Deepholm became accessible to players. It is the largest visitable level of the Elemental Plane, being a new questing, leveling, and exploration zone tuned for level 82-83 players. It also holds a 5-man dungeon, the Stonecore. The two main enemy forces the player fight against are the Twilight's Hammer and a large tribe of stone troggs.

Deathwing acquiring his new armor in Deepholm, during the Cataclysm trailer.

Temple of Earth in the TCG.

To keep Azeroth safe from these threats, the titans imprisoned the Old Gods underground and banished the savage elementals to the titan-constructed Elemental Plane, a secure dominion where the elementals could dwell without harming Azeroth. Four domains were created within this primordial realm to serve as ideal environments for each type of elemental. One of the Elemental Plane's domains, a rough domain known as the Deepholm, is home to the Earth elementals. With the elementals' departure, nature calmed, and the world settled into a peaceful harmony.[3] A variety of stone and crystalline creatures live within Deepholm,[4][5] including familiars such as stone drakes, shale spiders and Gyreworms composed entirely of stone and minerals.

Deathwing had been to Deepholm several times, and the forces of Therazane knew him.[6] He arrived once after being banished there by Huln Highmountain with the Hammer of Khaz'goroth.[7] Deepholm was also the place where Deathwing was nursed back to health after the events of Day of the Dragon. After he regained his health he ruptured out through the middle section of Deepholm above the Temple of Earth, which housed the World Pillar. Following Deathwing's Shattering of the World Pillar in Deepholm and his destructive re-emergence into Azeroth, the Elemental Plane collided with the physical realm and resulted in drastic geographical upheaval, causing chaotic elementals to pour out into the world of Azeroth. After witnessing the devastation Deathwing and his followers caused her realm, Therazane treats all outsiders with open hostility.

For a while, the temple was the main base of operations for Twilight's Hammer, but after the rupture the Earthen Ring took control of the temple in an attempt to stabilize the fractured World Pillar. Gunships of both Horde and Alliance entered Deepholm, however the Horde gunship, Storm's Fury, has been shot down. In the middle of Deepholm lies the Temple of Earth, which also holds the Stonecore. Inside the temple is a stone called the World Pillar. It bore the weight of all elemental and magnetic forces in Deepholm. However, it was shattered when Deathwing broke through into Azeroth. The quest progression in Deepholm will mainly focus on locating the missing fragments of the World Pillar in order to restore it and prevent Azeroth from collapsing into Deepholm. After the heroes convinced Therazane that they will indeed leave Deepholm once the World Pillar has been repaired, a battle takes place between the Twilight Cultists and Therazane's earth elementals. Ultimately with the help of the elementals of the earth, the World Pillar was repaired.

During the Burning Legion's third invasion of Azeroth, many shaman of the Earthen Ring noticed Therazane was not present during negotiations with the Elemental Lords, and rumors began spreading of a new threat in Deepholm.[8] On a recent expedition to Deepholm, one of the Earthen Ring teams recorded strange seismic activity that they deemed not ordinary tremors.[9] The Twilight's Hammer are also still present, led by Burglosh the Earthbreaker and being responsible for the death of the dragon Zeryxia.[10]

Even several years after the Cataclysm, the elementals of Deepholm still hold ire toward the black dragonflight because of Deathwing destroying the World Pillar. Ma'haat the Indomitable traveled to Highmountain to gather an essence of the black flight and keep it from the black dragon Ebyssian.[11] 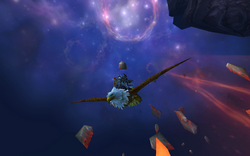 Flying into Deepholm from the Maelstrom.

The portals to Deepholm in the Eastern and Western Earthshrines of Stormwind and Orgrimmar unlock after players complete the first two quests leading through the Maelstrom and land inside the Temple of Earth. Return portals also exist in the Temple as soon as players get there.

As mentioned, Deepholm's main storyline revolves around repairing the World Pillar, destroyed by Deathwing's destructive return to Azeroth. Other notable events will be proving your worth to Therazane and her lieutenants, and to help a group of friendly earthen fight back against the vicious stone troggs.

The surface is rough, covered with fissures and craters, and it regularly quivers with earthquakes. When the realm of fire beneath breaks through, massive volcanoes form, until Therazane's earth elementals can put a halt to the incursion.

Deepholm is lined with caves, tunnels, and endless passageways. Worms, burrowing animals, and other subterranean creatures abound. Gems and jewels of all kinds, including those not known to Azeroth, can be found within, though they are considered the property of Therazane herself. No mining efforts are permitted in her realm. Some sages believe that a few of the precious stones possess strong innate magical powers, but the truth of this speculation may never be verified.[12]

The surface of this land is not pleasant to live on, but hardy plants and animals do eke out an existence here. Life for them is short and vicious, but Therazane the Stonemother nurtures them when she can. Striking at those she considers her "children" is the quickest way to earn her enmity.[12]

In a few rare places, the surface of Deepholm resembles a rocky, deserted section of Azeroth. Visitors to the Elemental Plane can find some measure of rest here, although the ground does shake and tremble with frightening regularity. Underground, travelers face not only quakes but also cave-ins, rockslides and other dangers.[12]