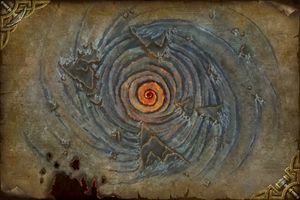 Jump on Aggra's Wyvern and fly into the breach at the Maelstrom. Once you're on the other side, speak to Maruut Stonebinder.

I knew you'd heed our call, <name>. When Deathwing was first defeated by the other dragon aspects, he retreated to Deepholm, the realm of earth.

Deathwing's return to our world left a rift open between Azeroth and Deepholm.

If we don't mend the breach, this land will be torn asunder.

We're doing our best to contain the damage on this side of the rift. Aggra will take you through the rift so you can help repair the damage from the other side.

Get on her wyvern when you're ready.

You've arrived just in time, <name>. All our resources are tied up keeping the rift stable.

We need someone like you to help us recover the fragments of the World Pillar.

Aggra says: I hope you have a strong stomach. Traveling through the breach is not for the weak.
Aggra says: We're at the center of the Maelstrom, the rift between Deepholm and Azeroth. Watch as it threatens to tear our world apart!
Aggra says: Let us hope Thrall and the others can contain it while you're inside.
Aggra yells: This it it! Brace yourself!
The wyvern dives through the breach!
Aggra says: You made it! Good!
Aggra says: This is the Temple of Earth. It's the most important structure in Deepholm.
Aggra says: There was once a Titan-made stone inside. It was known as the World Pillar. The name was literal. It bore the weight of all the elemental and magnetic forces in Deepholm.
Aggra says: It was shattered when Deathwing broke through the dome above and created the rift between the two worlds. All of Deepholm is going to collapse into Azeroth if we do not put the World Pillar back together.
Aggra says: The first fragment was going to be delivered to us by a Horde gunship known as the Storm's Fury. It never made it here.
Aggra says: We've taken control of the temple and we're containing as much of the damage as we can. Go inside and speak to Maruut; he's in charge.
Aggra drops you off at the temple entrance and flys off.
Aggra says: We are all counting on you.