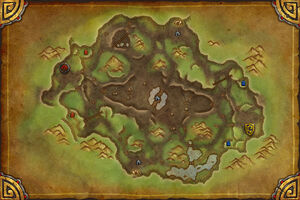 The mines and graveyards of Deepwind Gorge 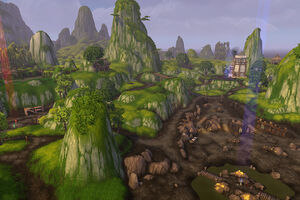 An aerial view of the battleground

Deepwind Gorge is a 15vs15 resource race battleground for level 90 players, introduced in patch 5.3.0. Set in the Valley of the Four Winds, the objective of the battleground is to be the first to generate 1600 resources.

The verdant Valley of the Four Winds has long enriched the continent of Pandaria with bountiful fruit, fields of grain, grandiose vegetables, and…gold?

Deepwind Gorge dips below even the Valley’s normal depth, and it’s here that the pandaren have turned the earth, exposing rich veins of gold. Ever since they freed themselves from the tyrannical mogu, the inhabitants of the Valley have made careful, cautious use of these riches, taking only what they need and paying attention to the limits of their land.

But the Alliance and Horde have their own plans for the gleaming metals of the Gorge. Amidst the quarry, filled with dislodged rock and connected by makeshift wooden bridges, both factions will rush for a bonanza of riches that only one can walk away with.[1]

Deepwind Gorge is the site of a combative gold rush battle between Horde and Alliance. Throughout the match, each team tries to capture and hold mines that provide gold when controlled.

Each team stores their accumulated gold in mine carts located at their faction’s base. These carts can be interfered with – and even brought back to your own base to ‘steal’ a portion of enemy gold.

While defending the mines you’ve captured, you’ll also want to prevent your enemies from controlling mines. Whichever team controls more mines is going to accumulate gold faster, so keep an eye on your resources. When one team reaches 1600 gold, the match is over, and that team wins.

Carts appear at each faction’s base, and there they stay…until they’re grabbed. If you can steal an enemy cart from their base, you’ll remove as much as 200 gold from their stores. If you can then drag that cart back to your faction’s base, you’ll earn 200 gold for your team. Beware: if your enemies slay you before you bring their cart to your base, they can recapture it – and earn back the gold you stole.

Seriously, beware: they’ll be trying to steal your carts as well. A successful cart theft can truly change the direction of the game. Simply click on any cart that’s not currently being held to interact with it 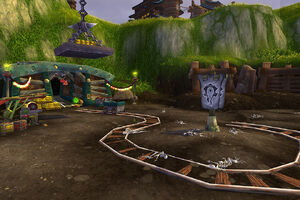 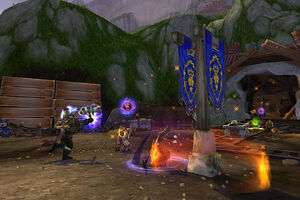 Battle at the pandaren mine

The three mines of Deepwind Gorge are located at fixed points in the Battleground: centrally, north (the ‘pandaren’ mine) and south (the ‘goblin’ mine). You can see the locations of these mines on your map.

To control a mine, you need to right-click on it and ‘channel’ – spend a short period of time uninterrupted, without moving. If you’re interrupted (for example, by an attack) you won’t capture the mine and you’ll need to try again. You lose control of a mine when the enemy team captures it – hence, killing enemy players and establishing numerical superiority around a mine is important.

Mines provide your team with accumulating amounts of gold over time, not instantly – so the length of time you hold a mine, not simply that you held it, is important. When either team attempts to control any mine, you’ll see a message that indicates which mine is under attack.

In the new Battleground situated in the Valley of the Four Winds, the Alliance and Horde continue their war for Pandaria's precious resources. While the two factions battle for control over mines, they must also protect their own resources from being stolen and turned against them! 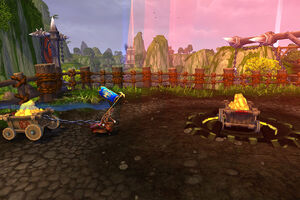 A Horde player capturing the enemy mine cart

Increases all damage caused by 30% and all damage taken by 10%. Also increases the player's size, and grants a flaming visual effect to the player's hands. Duration 1 minute. This power-up resembles a screaming skull.