[Signet of the Lookout] or

[Drape of the Helmsman]

Kill any 15 naga in the Abyssal Breach.

The whispers of the elements are crowding my thoughts, <name>...

The Throne of the Tides is under siege!

I cannot stand idly by while the naga threaten Neptulon's realm. We must find a way to join forces with him.

Nazgrim will escort me to the depths where I can commune directly with Neptulon.

I must ask you to take a more violent path. Keep the enemy forces distracted until I arrive safely at entrance to the Throne of Tides.

May the spirits see us through, <name>.

You will also receive: 24

They may think they've won, but my axe and I have something to say about that!

There is no direct followup. At this point, players should follow Nazgrim and discover the entrance to the Throne of the Tides. Down in the maw, Wavespeaker Valoren stands just to the west of the instance entrance and offers to teleport players back to the Abyssal Depths. Inside the dungeon, Nazgrim offers Rescue the Earthspeaker! and Sins of the Sea Witch.

There is no quick teleport back to the capital city, but remember the flight paths on the surface of the Shimmering Expanse do connect to the mainland. Additionally, The War Has Many Fronts, offered on the ships, but requires level 82, also directs players that way.

The subject of this section was removed from World of Warcraft in patch 5.4.8. 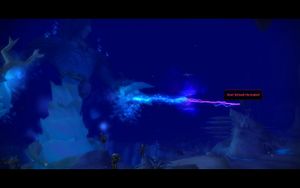 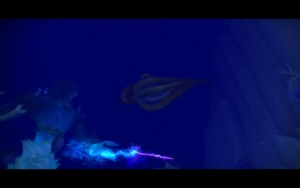 Talk to Erunak again to start the event.

Make your preparations, <name>, but do it quickly!

I am prepared, Erunak. Let's go!

The camera cuts outside as the sub exits the cave heading toward the Abyssal Breach. Inside the sub, players are in the bridge along with the crew and Erunak.

Verne Crewmember yells: I got a clear shot here. Get me more ammo!
Nazgrim yells: You heard him! Keep that gun stocked with ammo!
Hellscream's Vanguard says: Aye Sir!

Nazgrim yells: Keep those naga away from the crater!
Nazgrim yells: If they get a foothold in the plane of water, we'll never get them out!

The sub is circling the breach, taking pot shots, but there's not much the ship can do at distance against such numbers.
Nazgrim yells: Enough of this!
Nazgrim says: We waste our time here just floating about...
Nazgrim says: If we are to defend the rift, we must do it directly!
Nazgrim says: Set us down next to the crater!
Verne Crewmember says: Th-there's no way, sir! The current... it's too strong!

Erunak Stonespeaker says: Arise, friend. We have no time to lick our wounds!
Spotted, waves of naga start attacking!
Nazgrim yells: On your feet! Naga attack!
The party fends off the wave, but doesn't make any progress. Realizing this, Nazgrim calls for help.
Nazgrim yells: We must hurry! Do something, shaman!
Erunak blasts them to smithereens.

Nazgrim yells: That sub's gunna blow! We have to move, now!
Erunak Stonespeaker says: We must make our way to the crater!
The party moves closer, to the northeast.

Nazgrim yells: More naga... make ready!
Another wave, but Erunak quickly tires of this.
Erunak Stonespeaker yells: Enough!
Erunak Stonespeaker says: We must make haste! The elementals cannot endure this siege.
Moving onward, the next wave is Lady Sira'kess, who freezes the party in its tracks!

Speak to Nazgrim to conclude the quest.

Nazgrim swims down into the breach, which leads to the Abyssal Maw.

Back on the ships,

[82] The War Has Many Fronts will send players back to Stormwind or Orgrimmar.