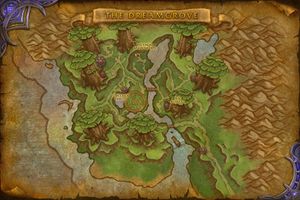 The situation is dire. The Legion is attacking the Shrine of Aviana in Hyjal, AGAIN! They must be after something specific, but I'm not sure what.

Us Druids of the Talon are skilled scouts and infiltrators, but are lacking in... durability. They won't be able to hold out for long! We must go to help!

What are you waiting for?! Get to the Shrine of Aviana in Hyjal!

The Legion will pay for what we've lost today. We escaped with as many of us as we could, but too many died in vain, trying to protect the Shrine and the Idol of Aviana, which was lost anyway, thanks to that demon scum, Shadegrove.

Once you're at Nordrassil, fly to the Shrine of Aviana.

Stage 1: Report to the Shrine

Fight your way through the demons and enter the building to speak to Skylord Shadegrove.

The mighty Legion has attacked, and we are barely holding off their siege.

How can we help?

Skylord Shadegrove says: You're ordered to report to the battlefield at once. Take out those demons shredding our front lines!

Kill any demons you see until the tracker bar is filled to 100%.

Stage 3: Return to the Shrine

Thisalee Crow says: Did you hear that? Screams from the shrine! We've gotta get back there!

[Travel Form] to return more quickly to the building.

Final Stage: Return to the Dreamgrove

[Dreamwalk] to enter the Emerald Dreamway, then take the portal to the Dreamgrove. Thisalee will be at the far back of the northwestern corner in the class hall.