Defense of the Alehouse 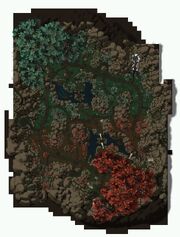 Defense of the Alehouse battleground.

Defense of the Alehouse was a MOBA-styled battleground that was never released. While it received updates throughout Mists of Pandaria it never reached a point that Blizzard deemed satisfactory.

The goal was to defeat the brew master of the opposing faction. Throughout the map, various bosses could be found that would provide temporary buffs for those participating in taking them down.

In-universe, the map was apparently part of the Townlong Steppes. The layout—three lanes, two bases, etc.—was extremely reminiscent of a MOBA map.