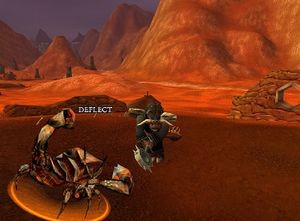 Deflect screenshot from the Alpha.

Deflect is an avoidance mechanic that functions exactly the same as parry, with the exception of only appearing to work for magical attacks that use the melee hit table, the most notable of these being

[Hammer of the Righteous]. Given that Deflection takes the same space in the combat table as parry, expertise will reduce the chance for a player's attacks, and additional parry rating will increase a player's chance to deflect attacks. Deflected attacks incurred parry haste while it existed.[1]

[Deterrence] gives a 100% chance to parry melee attacks and to deflect spells. The usage of Deflect for Deterrence is strange in that given what is known about Deflection, it appears to temporarily allow the hunter's parry chance to affect their spell avoidance chance, which is what causes the deflect message.

A spell being deflected.

UI messages about Deflects can be seen in-game by typing:

For abilities (or maybe spells?) "deflect":