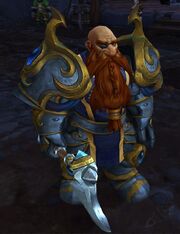 Delvar Ironfist is a dwarf death knight who was recruited as a follower by the Alliance commander during their initial tour of Stormshield. Delvar Ironfist is a surly dwarf that loves battle almost as much as mead.[1] His grand-father Gygax trained him when he was just a lad.[2] Lieutenant Howell described him as opinionated, a bit gruff and overbearing dwarf.[3] He can also be seen watching fights between garrison commanders in the Coliseum of Highmaul.

His Horde counterpart is Vivianne.

Me blade is sharp, me armor is spit shined and I combed me beard this mornin'.
I've been ready for battle since me grandpa Gygax first put an axe in me wee lil hand.
So whad'ya say, commander?

Delvar is recruited by completing

[90] Delvar Ironfist, which is the last quest offered to the Alliance champion during their first visit to Stormshield.

He may be related to Angus Ironfist and Inge Ironfist.