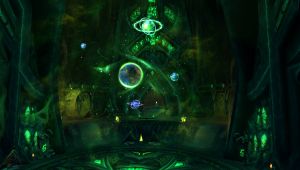 The Fel Hammer is a large Legion ship located on Mardum that serves as the Illidari's headquarters. It acts as the Order Hall for demon hunters. Once one of the Burning Legion's most valuable assets, this citadel was created to spearhead Legion invasions on other worlds. It was occupied by Brood Queen Tyranna and her forces, who were tasked by Sargeras himself with the safeguarding of the

[Sargerite Keystone]. When the Illidari invaded Mardum to retrieve the Keystone, they defeated the Fel Hammer's demonic inhabitants and conquered it in the name of their master, Illidan Stormrage. 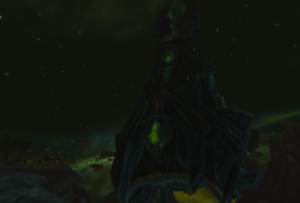 After retrieving the Sargerite Keystone, the demon hunters returned to the Black Temple while the rest of the Illidari stayed behind. These left behind Illidari have dutifully held this citadel since the Slayer's departure, but they have been unable to access most of its resources - the Fel Hammer could only be activated by those bearing the mark of a Legion lord. Thankfully, the blades of the Slayer carried that very mark, and as they activate the Fel Hammer, all the Illidari forces appear and bow down again before the Slayer.

Legion reinforcements arrived soon after the main Illidari forces and the Slayer returned to the Black Temple with the Sargerite Keystone in year 26, and destroyed the portal behind them. A glorious battle then ensued. In the aftermath, the Illidari uncovered an ancient Cursed Nathrezim Forge used to create many of the Legion's most powerful weapons. They've guarded it carefully ever since. 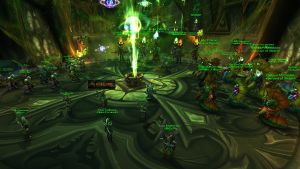 The Slayer assumes control of the ship.

The Fel Hammer also houses a nether crucible - more powerful than any the Illidari had crafted before. The souls of the hundreds of slain demons in Mardum have provided the nether crucible with enough power to directly observe the Legion on Azeroth. The fel blood inside froths violently, with a swirl of obfuscated shapes bubbling just below the surface. 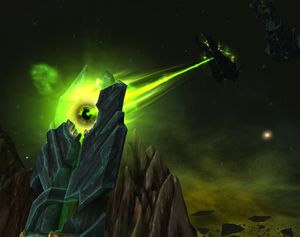 The Fel Hammer comes under attack by the Burning Legion, who bombard it with more ships and board it. The first thing the demons did was disable the Fel Hammer's weapons, allowing them to board unhindered. After the Illidari fight them off, Lady S'theno and Kor'vas Bloodthorn agree to use the ship's damaged weapons to blast the Legion out of the sky, even if it risks the Fel Hammer.[1] Afterward, S'theno travels to the Broken Shore to lead the team searching for materials to repair the ship.[2] It is eventually fixed.[3]

Illidari Redoubt A portal to the Fel Hammer resides on a floating island off of Krasus' Landing in Dalaran. Demon hunters can glide to the island. If the glide is interrupted or the jump is too short, a felbat will catch the demon hunter and drop them on the island.

Top deck Only accessible in a scenario as part of the demon hunter class campaign. The top deck has battle stations that fire down upon enemies.