Not to be confused with demon hunter. 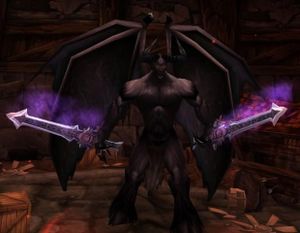 The demonhunter model is a model used by several NPCs in World of Warcraft. The name "demonhunter" is taken from the game files as no other name is known. Some NPCs use this model to represent their arguably unique demonic race, while others just use the model as a shape after using a

[Metamorphosis]-like ability. It should be noted that the only NPCs that aren't the result of the metamorphosis ability are Atiesh and The Cleaner. Therefore, it is likely that this is just the shape that the caster transforms into during metamorphosis, as the events of Atiesh apparently were retconned out in World of Warcraft: The Comic and The Cleaner was mostly a game mechanic.

When the demon hunter class was added, unique models not based on this one were used for their demon forms.