For the warlock specialization, see Demonology. 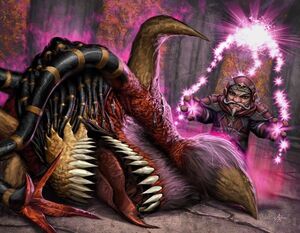 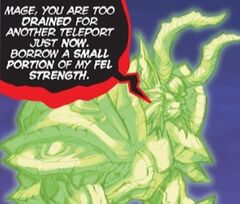 A demonic soul offering a portion of his fel strength to a mage.

Demonology is the study and practice of demons. The official teachings of the Kirin Tor are that demonology is to be eschewed, avoided, and abjured. Any attempt to summon demons are to be found out and stopped at once, and those involved are to be expelled, or worse.[1]

By their very nature, demons are leeches on the living universe—but the demonologist has mastered harnessing the power of these malefic beings on the field of battle. Warlocks harvest the souls of their defeated enemies; those specialized in the ways of demonology use this life essence to tap into the Void or to pull all manner of abomination from the chaos of the Twisting Nether.[2]

While such a practice is often considered by outsiders to be wicked and reckless, the demonologist maintains absolute control over the summoned creatures. These malignant entities are fully beholden to—and empowered by—the will of the warlock, until banished to the realm from whence they came.[2]

Demonology is the study and practice of using and amplifying demonic powers and the ability to summon items or Demons, mostly using Soul Shards.

The craft of conjuration is the primary focus of the warlock, and in taking on the mantle of a demonologist the warlock sacrifices knowledge in other areas of arcane practice.[3]